The Jewish Community Center of the North Shore had seven executive directors in 12 years, but it wasn’t until current Executive Director Marty Schneer arrived, just as the JCC was about to close in the fall of 2012, that the center reached a turning point. “We were this close,” said Schneer, gesturing a small space between his thumb and pointer finger, “two payrolls away from closing unless we were able to come up with revenue.”

JCC leadership, according to Schneer, was uninformed of the dire situation until August or September of that year. Hiring him on a one-year contract, they couldn’t even guarantee him a full year’s salary. “Running a non-profit is a delicate balance,” said Schneer, “Many factors contribute to its success or failure.” Of course, he’s only one man, and couldn’t have done it all himself.

With the help of President John Smidt and Treasurer David Kasoff, the three of them, let’s call them the JC Three, worked for years to turn the JCC into the thriving community center it is today, making it so popular that it is nearly impossible for anyone to find a parking spot.

“They understood what it took to turn the place around,” Schneer added. Neither Smidt, with a background in the leather business, nor Kasoff, an engineer with business experience, had been involved in leadership at the Center, but had joined prior to Schneer in June 2012.

“The problem really was a financial problem, but it was more than just financial because the size of this organization had shrunk,” said Kasoff. The first step the JC Three needed to take was, according to Smidt, to discover the financial problems, analyze them from a business perspective and establish a budget. “We got things stabilized and understood,” said Smidt.

“Marty brought a lot of new programs in,” said Kasoff, “We were focused on survival, he was focused on growth and continuing.” The JC Three became a team with those two separate visions in mind, according to Kasoff. They began by minimizing expenses wherever they could and, as it turns out, there was a plethora of unnecessary expenses. “We basically moved in,” said Kasoff. What the JC Three discovered was a number of poor contracts and agreements signed that were bleeding the Center.

By eliminating MediFit, a company that designs and manages corporate wellness programs, the JCC saved approximately $250,000 a year. Previous leadership had hired MediFit to run the membership and fitness operation because they hadn’t had experience in that area. “I’m coming in looking at an $850,000 operating debt that occurred two years in a row,” reiterated Schneer.

Schneer had run Centers and memberships in Philadelphia and Boca Raton before, and has been in the business for a long time; he knew exactly how to manage the memberships and fitness operations. He didn’t need MediFit. “I decided to keep the same people and do it myself,” he said, and just like that took $250,000 from the operating debt.

A copy machine contract  cost $90,000. “We just signed a contract for $23,600,” said Schneer. They were spending $11,000 disposing of feminine hygiene products in the women’s bathrooms that were determined to be hazardous waste. “Does the state consider those products to be hazardous waste? No.” Schneer answered his own question. They disposed of the hygiene products themselves and eliminated that cost. They also implemented energy saving technology such as new lighting to improve the sustainability of the building while being environmentally aware. 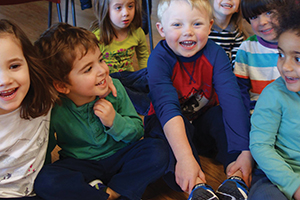 Another critical aspect of running a non-profit is philanthropy. In general, people don’t want to donate to a cause that isn’t run well, lest their generosity be wasted. “They want to see something that is well managed and something that gets return on their investments,” said Schneer. Donors were hesitant to give to the JCC because they realized how poorly it had been managed. The JCC had to gain the community’s confidence, while simultaneously turning the entire business around.

Today, the JCC can boast about three years of finishing in the black and another year of financial success anticipated for 2016.  The key areas of revenue in the JCC, according to Schneer, are fitness, membership, preschool and camp. Part of his strategy when he arrived was to focus on those aspects of the business and expand them by adding events such as the Jewish Film Festival. Schneer, along with current JCCNS Vice President, Izzi Abrams, created a Jewish Film Festival in Marblehead in partnership with Warwick Theatre, and last year the event sold 1,600 tickets. “People view it as our commitment to Jewish cultural arts and the local community,” he said.

“In hindsight, failure was not an option,” Smidt said.

In Schneer’s mind, what is most exciting about being part of the institution is creating a vision for growth and expansion for causes that people care about. To lead, one must be able to see the big picture; there needs to be a degree of passion, flexibility and balance, said Schneer. “A lot of people grew up in the community and there was a hope that the place could turn around. Many people, including immediate Past Board President Betsy Rooks and current Board President John Gilberg, among others, cared and stayed and had hope. With a few signs of change or turnaround there was always hope.”