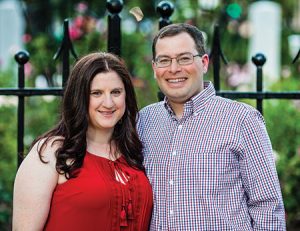 Esther & Neal Kaufman of Peabody have announced the engagement of their son Barry to Amanda Dropkin, daughter of Sheryl & Steven Dropkin of Newton.
A graduate of Peabody Veterans Memorial High School, Barry received a Bachelor of Arts Degree in Quantitative Economics from Tufts University.  He is an Enrollment and Student Assignment Senior Analyst with Boston Public Schools.
Amanda, a graduate of Newton South High School, received both her Bachelor’s and Master’s Degrees in Mechanical Engineering from Cornell University.  She is the Power and ThermoFluids Analysis Group Lead at Aurora Flight Sciences.
The couple currently resides in Brookline.  A May 2017 wedding in Norwood is planned.