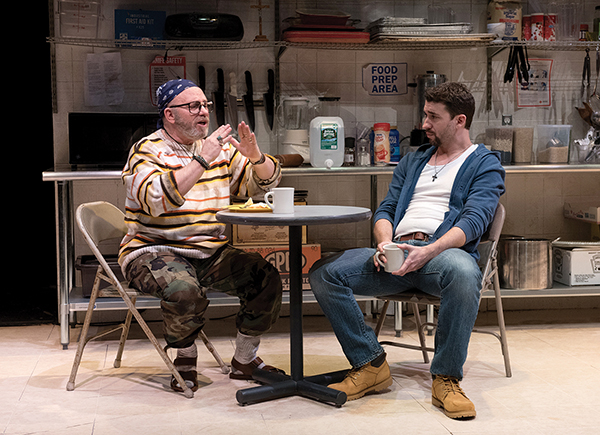 What should theatergoers make of a Jewish homeless veteran whose essential role model is his Bubbie who has been working at a nursing home tending to fellow Jewish grandmothers? The middle-aged veteran in question, known as Frog, is finding his own care of sorts at an ecumenical industrial soup kitchen run by a Bronx church in the 2014 drama “Grand Concourse.” Playwright Heidi Schreck, who worked in soup kitchens herself while growing up, has spoken of the title not only as the pivotal Bronx  street but also as the term for a grand meeting. The disarmingly mundane   ‘grand meeting’ in her thoughtful Off-Broadway effort calls into question such big issues as faith, individual commitment and forgiveness for four very different characters- a coming together persuasively evoked in its New England premiere (through April 1 at the Calderwood Pavilion) by SpeakEasy Stage Company.

“Grand Concourse” finds Frog, kitchen directing nun Shelley, maintenance man and security guard Oscar and young (19) volunteer Emma returning daily to the soup kitchen in question much as the movie theater workers and a patron come together in the similarly well-detailed 2013 Annie Baker play “The Flick” (Schreck not surprisingly familiar with Baker’s work as an actress). All four possess unresolved issues and seek real validation as human beings. Sister Shelley, experiencing a crisis of faith, struggles to complete a personal prayer to God “for all people,” one that calls for “justice for immigrants.” Oscar, who once studied dentistry for a year in his native Dominican Republic, now studies towards a degree at a community college but wonders whether he and (unseen) girlfriend Rosa can make a life together.  Frog, good-natured but paranoid and volatile when off medication, sells joke books and craves attention- especially networking to find a job.

Serving as a catalyst for resolving their respective issues as well as her own is kitchen newcomer Emma. Kicked out of college and seeking direction, the seemingly aimless young volunteer tells Shelley she wishes her mother would treat her like a normal person and eventually looks to the kitchen director for maternal support and understanding. Flirting with Oscar and crossing the proverbial line (in a scene that makes the play appropriate for adults), she leads him to question his feelings for her and for Rosa. By contrast, her positive interaction with Frog involves finding him interviews for work and job possibilities – one which turns into a real receptionist position and more self-respect. Her own formidable challenges appear to be a mother-daughter conflict, leukemia and chemotherapy.

Ultimately, a stunning revelation forces Shelley, Oscar and Frog to re-examine their respective relationships with Emma. Has she been honest with each of them? Has she been honest with herself? Is she worthy of sympathy and forgiveness?  Schreck makes their individual confrontations with her dramatically satisfying. That is particularly the case with Shelley’s last scene actions which the playwright intriguingly labels “a kind of benediction.”

For her part, pains-taking director Bridget Kathleen O’Leary is blessed with a cast that strongly evokes the characters’ respective ups and downs and evolving fortunes. Melinda Lopez captures Shelley’s world-weariness and self-doubts regarding her beliefs. Her last scene evocation of the kitchen director’s growing elation and joy as she makes a life-changing decision is the kind of seamless acting that all theater students should carefully examine. Alejandro Simoes has all of Oscar’s charisma, great energy and emotional impulsiveness. Thomas Derrah catches Frog’s likeability and elusiveness as well as his vulnerability – the last most notably when a missed medication leads to a visceral outburst.  Ally Dawson does well with the tricky role of alternately diligent and derelict Emma. Her properly complex characterization means that individual audience members may ultimately debate Emma’s real intentions.

“Grand Concourse” may not provide breakthrough insight about its characters’ priorities and beliefs. It may not reach the visual epiphany and cumulative insight of Baker’s “The Flick.” Still, SpeakEasy Stage takes theatergoers on an exhilarating ride in Schreck’s heartfelt play.