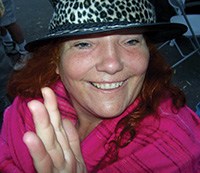 JUNE 29, 2017 – Nobody ever thought much about Dora’s trunk. It sat there in the corner of the tiny little cell-like room she inhabited in the rafters of my grandparents’ Victorian home, just another piece of old-fashioned furniture. Dora herself was much like a human part of the furniture. She was just always … there, a dependable part of my childhood, a social furnishing within our family circle.

I spent many hours with Dora on hot summer evenings up in that attic room on the third floor. I would sit on the trunk and swing my legs, watching her knitting, listening to her mutter odd comments under her breath in a language I didn’t really understand.

Dora owned very little. Her daily outfit was a plain blue maid’s dress, with a white cotton apron she’d quickly don the minute she stepped into the kitchen downstairs. In her room was a single bed, squeaky and iron; a faded armchair that had seen better days, worn from use; and that old wooden steamer trunk, which was never opened for any reason. I always just thought of it as something to sit on.

Dora was a tiny, birdlike person, only about 4½ feet tall. Nobody else ever made the long trek up the narrow stairs to her room – not even my grandmother, who ruled her domain with an iron fist in a velvet glove. I was Dora’s only visitor.

Nearby, in a much larger and better-appointed third-floor room, my grandfather hand-cut reeds for his oboe, and practiced the music that was his reason for living, as well as the source of his income. In the bathroom down the hall, a pointy golden star hung from the towel rack, two triangles connecting. It swung in the colored breeze from the small window with the green stained-glass squares, and I often played with it in my childlike way as it glittered when it caught the sunbeams. Like Dora’s trunk, I didn’t think much of it. It had no meaning for me. The star was pretty, so I played with it in the sun. That was all.

My grandfather had arrived in America, with an old oboe and $27 in his pocket, from Vienna. My grandmother came from Germany. In their home, the nerve center for our extended family, they spoke German and Yiddish, which, as far as I knew, was just some other kind of German.

My grandmother spoke High German, highfalutin’, almost French-sounding. She was quite reserved; cultured and delicate. My grandfather was more expressive, at times guttural. Where they came together in their expression was their Yiddish: he, chomping on his ever-present cigar, yelling and gesturing, and she, restraining and attempting some semblance of manners and reasonability at the family table.

Between these poles, the family circus played. Dora would be summoned with a little tinkling bell affixed to the dining-room door, near my grandmother’s unassailable place at the table. And she would enter silently with silver trays laden with pickled herring and caviar, brisket, red cabbage and sauerkraut, Brussels sprouts, potatoes in a thousand permutations, and eventually, her personal specialty: handmade Viennese pastries.

As far as I knew, we were Catholic. My grandparents didn’t go to church; my parents, more frequently. I failed kindergarten in the public school, and went on to repeat it in the Catholic school nearby. I played with things in my grandparents’ house; the golden star, the tinkling bell, the strange twisted animal horn atop the color TV, the hand-carved Noah’s ark with all the old-fashioned animals in pairs, all the way from Germany, which had been my grandmother’s own toy in the unimagined past. I joyously played with these artefacts as I prepared for my First Communion. But I had no understanding of where they might have come from, or what they might possibly mean.

I never really understood what everybody was arguing about in Yiddish. I thought my grandfather’s special pet name for me was Oy Gevalt, because that was what he yelled every time I set foot in his house. I didn’t question why they didn’t go to Mass with me. But I did start to ask questions when my grandmother died, and kosher butchers turned up at her funeral, in big black hats and peyes. “They’re your cousins,” I was perfunctorily told.

When Dora died soon afterward, I asked more questions. Nobody really wanted to answer my questions. “She came from Europe,” I was told. “All her family died in the war. She didn’t have anybody else.” There was no further discussion.

Dora never left a will. She had nobody to leave anything to. And then they opened Dora’s trunk. It was crammed to the brim with carefully folded wads of cash. In it was every dollar she’d ever earned from us, cooking the brisket and scrubbing the floors with bleach on her tiny hands and knees, ever answering the call of that silver bell.

And a little note, in her spidery Yiddish handwriting, thanking our family for the small American life she’d lived.

The complicated tale of a mother’s flair for the dramatic

The complicated tale of a mother’s flair for the dramatic