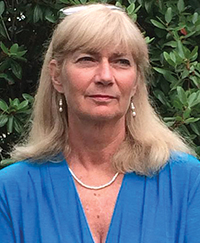 JULY 13, 2017 – From where I stood, I could see the gleaming lake, framed by the chuppah. Guests assembled under a tent, music swelled, and moments before my husband and I walked our son down the aisle, I turned to my firstborn, and asked, “Where’s your kippah?”

Later, his wife told me she respects his decision not to wear a kippah as much as he respects her faith. And it pleases me that their children, if and when they have them, will be raised as Jews. As the poet Ezra Pound said, “What thou lovest well is thy true heritage.”

Supported by their love for one another, my son and his wife will call on their heritages and their beliefs, and pass them on to their children. That they are free to do this fills me with joy, because elsewhere and otherwise, religious freedom is curtailed or nonexistent. Religion cannot be regulated; it is a manifestation of identity and understanding, a conviction based on history, education, a leap of faith, and an acceptance of doubt … Does God exist?

I’m no religious scholar, nor do I identify with any particular faith, although I was raised in the Episcopal Church. By the time I was 14, I rejected the Holy Trinity and embraced the idea of an unknown divine. I left the church, only to make a brief appearance when my sons were born. They were baptized in the Episcopal Church, but their religious studies were more focused on the mysteries of creation, mysteries that paved the way to an examination of existence.

Now my children are in their 20s, and neither one identifies with conventional religion. My boys were gifted with freedom of informed choice, to respect the beliefs of others, to revel in the glories of the natural world, and to seek meaning in all they did. We celebrated Easter and Passover, Christmas and Hanukkah, and many other holy days and religious observances, including Ramadan.

Our house was filled with symbols of faith: Ganesh, Buddha, a Celtic cross, miniature portraits of the Madonna and Child, a mezuzah, Ojibwe art, dreamcatchers, and prayer rugs. Each religious holiday opened a window on the world and presented me with an opportunity to teach my children about faith, devotion, symbolism, and acceptance. They knew the biblical and First Nations creation stories as well as the stories of Aslan, Bilbo Baggins, and Luke Skywalker.

As a parent, I prepared my children for a multicultural world with a multitude of faiths. They would find their own god, their own philosophical precepts, their own definition of the divine, just as I did. And just as I did, they would never reject another human being for adhering to their religion.

The dictionary defines religion as “a personal set or institutionalized system of religious attitudes, beliefs, and practices” and in the end, that’s what we all have to do – find a guide to life. My “attitudes, beliefs and practices” transform and inform my daily interactions, and now that my son has married a Jewish woman, I feel closer to an understanding of the divine than I have in 20 or 30 years. Part of this may be due to the warm welcome I’ve received from my daughter-in-law’s family, part may be due to an affirmation of the importance of family, and a big part is due, quite simply, to my observation that my son is deeply in love, and that love colors everything in my life, that love gives birth to family.

My religion, then, might be defined as love. Love the divine, for the mysteries of creation can be explained no other way. Judaism, and the history of those who practice that faith, has come under attack for centuries, and there’s no need to go into the atrocities here. But as my daughter-in-law said, she feels lucky to be here, given those who are not, and I am truly blessed that she is here with me and my family, and most especially, that she is my son’s life partner. We are all on a journey, seeking spirituality, wisdom, grace, and inspiration. We go into the light and leave the door open for the divine. We are, as those who came before us, restless for truth, civility, care in human engagement, honesty, and integrity.

And I will go on that journey with my new Jewish family, for they have done much to restore my faith in the goodness of my fellow human beings.

Catherine Parnell is a writing and editing consultant who lives in the Greater Boston area.

In a shift, Hebrew College will now admit and ordain rabbinical students whose partners are not Jewish

In a shift, Hebrew College will now admit and ordain rabbinical students whose partners are not Jewish