Judaism and Zionism bring couple together

Judaism and Zionism bring couple together

JULY 27, 2017 – According to the song, Autumn in New York is inviting and romantic, but for Swampscott’s Rachel Levine and NJ native Ari Podhorcer, spring was great too.

Matched by a mutual friend, the two used technology for a few days before going old school and meeting in person. Their first face-to-face date in Central Park lasted hours and included both an ice cream appetizer and lunch.

“We connected over our love of movies, our compatible senses of humor, and our desire to move to Israel,” recalls Levine, who also notes how important it was for her to find someone who shared her Zionist passions and her desire to “live a Jewish life.”

Though the two had agreed that marriage was in the cards long before, and despite the fact that it involved a return to the setting of their meeting, the proposal in August of 2016 was, Rachel says, “a complete surprise.” 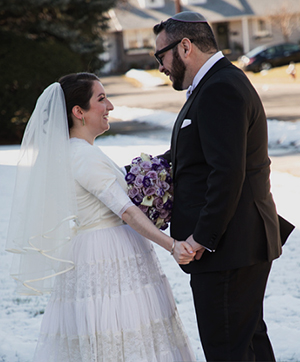 “I met a friend … in Central Park after work to hang out and then get dinner,” Rachel recalls. “As we were walking, she led me down a path covered in rose petals. [Another] friend of mine was there playing Salut d’Amour on the violin. When I reached the end of the path, I came to a bench that had a bouquet of roses, a stuffed animal, and an envelope with my name on it. Inside the envelope was a letter that Ari had written me. When I finished reading the letter, Ari came from the other end of the path, got down on one knee, and asked me to marry him.”

The violin music was a suitably apropos proposal for Levine, a Swampscott native who attended Cohen Hillel Academy. The long-time musician moved to New York after graduating from Brandeis with a BA in Music Performance to study the Suzuki Method at the School for Strings in Manhattan. Levine now teaches Suzuki violin at Rutgers University Extension Division of Mason Gross School of the Arts, following her mother, Ellen, who also taught her.

“Standing under the chuppah was a really happy and exciting time,” Levine recalls. “I was worried I would feel ‘on display,’ but I was so present in the moment and what was happening that I hardly noticed.

It was very special and meaningful to start our life together in this space that was both public and private, and in the same way that Jewish people have done for generations.”

Though their path to the chuppah was festooned with rose petals, the official plans for the wedding were not always so rosy.

“Wedding planning was a crazy time,” Rachel says, recalling all the “small, insignificant” and yet vital details that need to be considered when preparing for that perfect day.

Fortunately, everything came together, thanks in great part to the support of family and friends.

“As our relationship became more serious, it was important that we got close to each other’s families,” says Rachel. “We are both very lucky to have warm and loving families.”

Armed with a lot of support and a mindset of acceptance (based on her suspicion that “things are going to go wrong”), Rachel officially united with her basherte on February 19, 2017.

“The day was absolutely wonderful,” Rachel says, still pleasantly surprised. From the weather to the ceremony to the reception, everything went off just as she and her new husband had dreamed.

“We were both just so happy to be marrying each other,” Rachel beams, “and we felt so lucky to be surrounded by our friends and family and be able to celebrate with them.”