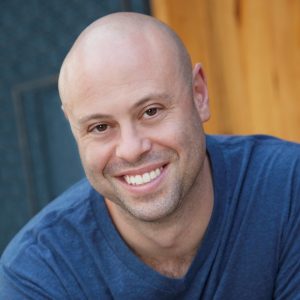 “I loved the feeling of getting a laugh,” he explains, recalling living room stand-up routines with his father in Newton, and rushing home to see who was making people laugh on TV that night.

On September 8, the New York resident will have a chance to make others laugh as part of the First Annual North Shore Comedy Blowout at The Cabot in Beverly (thecabot.org). Also on the bill are local faves such as Dave Russo, Orlando Baxter, Christine Hurley, and the “Godfather” of Boston comedy, Don Gavin.
Though he spent hours watching and listening to the legendary likes of Jewish jokesters like Roseanne Barr, Richard Belzer, Billy Crystal, Jonathan Katz, Wendy Liebman, Jackie Mason, and the late Dennis Wolfberg, Fisch recalls early days as the class cutup, even at shul in Newton.

“My Hebrew school class was a lot of fun,” he muses. “Maybe too much!”

While the principal knew his name well, Fisch says his fellow students did too, in a much more positive sense.
“Even at bar mitzvahs and High Holiday services, we would run wild in the temple,” Fisch recalls of his days as a ringleader. “It was just fun to be a part of the joke. If you contributed you felt cool.”

When it came time for Fisch’s turn at the Torah, however, he was all business.

“My bar mitzvah was pretty much by the books,” he observes of the ceremony upon which he still looks back fondly. “I studied hard for it and I didn’t dare use it as any opportunity for laughs. It was a celebration of ceremony and family.”

After college, however, Fisch was ready once more to take the stage for a funnier purpose.

“I saw a continuing education workshop at Brookline High School,” he recalls, thanking early mentor and Boston comedy legend Rick Jenkins. “It ended with a five-minute live performance as the graduation.”

Supported by family and friends but still “petrified,” Fisch only invited a handful of those he knew to this “ceremony.”

As it became known that Fisch was on the scene, however, more and more people began to come see – and laugh at – what he had to say.
“I was quiet in groups,” he observes, “so people I didn’t know well but hung around with a bit may have been surprised, but people that knew me well weren’t surprised that I was doing comedy.”

He made his network television debut on “Late Show with David Letterman” in 2012. As his fan base grew, so did Fisch’s love of the laughter.

“I don’t know if there was a moment I realized it was more than a hobby,” he says, “but since I started it’s been the thing that I am most passionate about in life.”

As with so many performing passions, Fisch’s comic career brought him to New York. But while he may now call the Big Apple “home,” he still considers the Hub “home home.”

“There is just something about New England audiences that is the best,” he says. “I understand the people here more than anywhere else and I miss New England so much.”

So while comedy has brought Fisch (and many others) much joy, he understands the idea that it is well-suited to the travails of Jewish existence.

“When you suffer, you need comedy,” Fisch sagely suggests. “We’ve always suffered. But something tells me that, even if everything were to become perfect, a Jew will find something to complain about. It’s in our blood!”