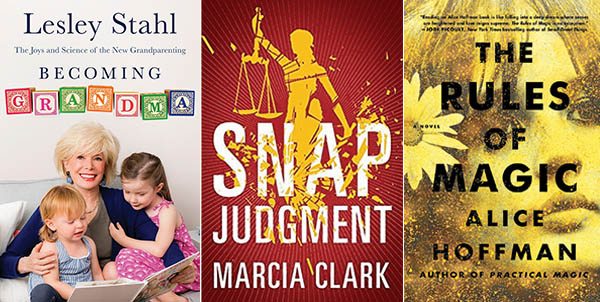 According to Schneer, the series – still called “the Jewish Book Month Speaker Series” though it now spans September to December – began as a relatively small event that was intended more as a means of cultural enrichment than fund-raising.

“At the time, the JCCNS programming staff found that it was often hosting individual events with authors and saw that there was a communitywide interest in seeing authors locally, so it was decided to try to put together an entire series of author events,” he said.

Most people don’t know that Stahl – who is the only woman ever to moderate “Face the Nation” and has been on “60 Minutes” since 1991 – was born into a Jewish family in Lynn and grew up in Swampscott. In 2016, she wrote “Becoming Grandma: The Joys and Science of the New Grandparenting,” which became a bestseller.

Clark, who is best remembered as the lead prosecutor in the 1995 O. J. Simpson murder trial, was raised in an Orthodox Jewish family in Alameda, Calif. After the trial, she wrote about it in “Without a Doubt,” coauthored with Teresa Carpenter. The book made the No. 1 spot on the New York Times bestseller list.

Feldman, who lives in Michigan, is a nationally known dietician who wrote “Grocery Makeover: Small Changes for Big Results,” a diet and nutrition book that leads readers on an aisle-by-aisle guide to healthier trips to the supermarket.

Hoffman, who is Jewish and grew up on Long Island, is the prolific New York Times best-selling author of over 30 books, including “The Dovekeepers,” the story of the siege and survivors of Masada.

In addition, several local authors will be featured at the JCCNS on November 9, including community leaders Lou Cove, Janet Freedman, Susanna Lannik, and Sharon Rich.

The authors will appear at several venues.