The Personal Essay: Nobody likes succotash 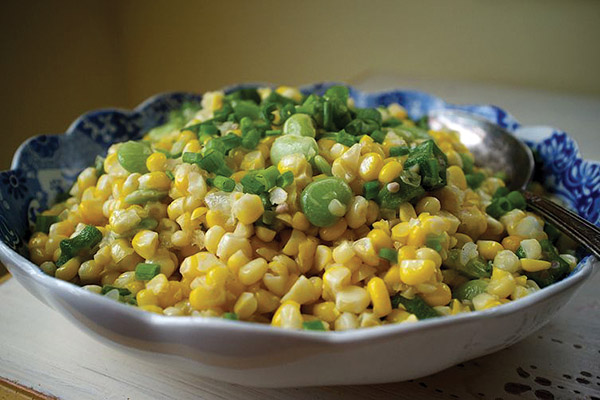 DECEMBER 7, 2017 – “Nobody likes succotash,” muttered my grandmother, as Dora brought in a cold casserole dish from the Thanksgiving table. With the feasting and multilingual merriment still in full raucous swing, it was only me, my grandmother, Dora, and great-aunt Rivka who bore chill witness to that greatest of household sins: the obscene, unholy wasting of food.

The fine ceramic casserole, very nearly a tureen, bore intertwined flowers in a crimson pattern, edged with gold. In it, nearly full to the elegant brim, sat a congealing, contrasting greyish-yellow glop of that all-American food, succotash. Served only once a year, it was Dora’s nod to her adopted homeland. Some years, she cooked it with dried lima beans and corn, soaked and salted for two days, trying to make the dish slightly more savory with a big dollop of schmaltz. Some years, she valiantly tried to cook it with milky-fresh corn kernels sliced off the cob, and fresh-ish lima beans or broad beans from the market, to be popped out of their khaki-colored pods (although these were usually quite tough by autumn).

In this particular year, she’d basically given up, and under instruction, used frozen corn and canned lima beans, mixed with canned cream of mushroom soup. (As my grandmother had read, in a trendy women’s magazine, that this was the modern American way to prepare it.) Regardless of the mode of preparation and effort invested, one thing was certain: succotash was not a popular foodstuff in the Ashkenazi European-diaspora culinary playbook.

“The Indians liked it,” countered Aunt Rivka. “So, we got Manhattan for a bargain, but the succotash was maybe their revenge. Good for them.” Turning toward my grandmother, she supportively continued, “It’s American. It’s tradition. We have to serve it. It goes with the holiday. We’re not American, if we don’t serve succotash.”

“I hate wasting food,” countered my grandmother, wringing her hands. “It hurts to see it. I don’t hate much. I don’t. Live and let live. To each their own. But food, I can’t waste.”

Trying to be witty at this point, I mimicked my grandfather, to break the kitchen tension. “Oy gevalt!” I bellowed. “There are children starving in Europe!” Now, when this was conversationally yelled at the family table (as it often was, if we were not members of the fabled Clean Plate Club – which I thought must actually exist somewhere, and with a socially sought-after membership) … we kids always had a response. Sotto voce, in undercurrent unison, we would respond: “So, send it to THEM!”

But on this particular Thanks­giving night, my joke fell flat.

“And you don’t know from children starving in Europe,” quickly interjected Aunt Rivka. “We do. We know children who died in Europe. Girls like you. Girls your age.”

The kitchen fell uncharacteristically silent. Dora looked at the cold gluggy succotash, then at my grandmother; then back and forth, from the garbage bin to the Philco fridge, and back at the succotash. Sighing, my grandmother gestured towards the big, boxy refrigerator. Dora stowed the sludge in the fridge without comment, wrapped in plastic.

As November started to ice into December, Aunt Rivka loved to warm up for latke season. No matter how early or late the “pre-Christmas week” of feasting would commence (which I now recognize as a secular observance of Hanukkah, complete with chocolate Hanukkah gelt, strange spinning tops, and plug-in electric menorahs), Rivka would fire up the big cast-iron skillet, load it up with gallons of green olive oil, and start frying up the potato pancakes the day after Thanksgiving.

It was as if she couldn’t wait – and she was very good at it. She served this in sequential courses every Thanksgiving Friday, at lunch. Those post-Thanksgiving latkes always started with crispy/fluffy delicacies, made up of the leftover, milky mashed potatoes mixed with egg, flecked with parsley. They were fried crunchy on the outside, and fluffy soft on the inside.

Next from the skillet would come more traditional latkes: grated raw potato and carrot, mixed with chopped raw onion, chopped leftover roast potatoes, caraway seeds, flour, and eggs. If there were leftover sweet potatoes, Rivka would give them a similar treatment in a separate course, with the addition of raisins and garlic.

While Rivka was frying up a storm, Dora and I would be preparing the applesauce. Sending me down to the root cellar, I’d come back with a frilly apron full of the pinkest apples I could find, smelling vaguely of roses. As Dora chopped, I stirred the big tin pot as directed, then wielding a handheld potato masher, Dora adding handfuls of brown sugar, glugs of honey, dashes of vanilla, pinches of salt, and most importantly, the “apple spices” – ginger, mace, allspice, nutmeg, and cinnamon. (If there was ever any applesauce left over – which was a rare enough occasion – this would be magically transformed into a flaky-pastry apple strudel the next morning, to be savoured with strong Viennese coffee.)

Grandmother would dish up thick sour cream in a silver boat; she always sprinkled it lightly with paprika; I suppose as a decorative effect, or perhaps a remote nod to ancient ethnicity.
Out would come the latkes; traditionally, a dairy meal that everyone eagerly anticipated, after gorging so heavily on turkey the night before.

On this particular Friday lunch, however, a little something different came out of the kitchen. Great-aunt Rivka, ever the innovator (and astonishingly so, given her advanced age), could not stand the thought of anything going to waste in the rear of the Philco. Annual food wastage: enough was enough, and hang the New Country tradition.

Conspiring with Dora, Rivka sent me back down to the root cellar again, this time for an apron-full of starchy russet round potatoes. Dora made quick work of grating them. I was commanded to bear the ceremonial sour cream and apple sauce to the dining room. Re-entering the yellow kitchen, I could smell the latkes sizzling in the pan, and my mouth watered.

Victorious, Dora carried a veritable mountain of hot latkes to the family table on the ancient blue platter, which nearly dwarfed her tiny frame. Everybody was hungry. Eager hands and forks quickly reduced the fried potato mountain to a few crispy crumbs.

“Hey, these are good!” people called out to Rivka as she resumed her place at the table, next to my grandmother on one side, and me on the other. “Your best yet!”

I tucked into my platter full of golden fried goodness. But, curious, before I covered my second latke in a tsunami of sour cream with an applesauce landslide, I cut a big one open with my knife.

“Hmmmm,” I thought to myself. I didn’t say anything. There were flecks of yellow, and a few khaki-colored dense chunks, slightly denser and darker than potato.

It dawned on me all at once: the handheld potato masher, wielded at speed, and with considerable (womanly) force. The round red potatoes, starchier than many; the darker golden crust. The family had no idea. I watched in awe as even the last little crunchy bits were eagerly scraped off the platter, and dolloped with sour cream.

Great-aunt Rivka nudged me quietly. “Nobody likes succotash,” she whispered into my ear. “But EVERYBODY likes latkes!”

Tspora Roth never met a potato she didn’t like, including Mr. Potato Head. Email her at cornmother@outlook.com.