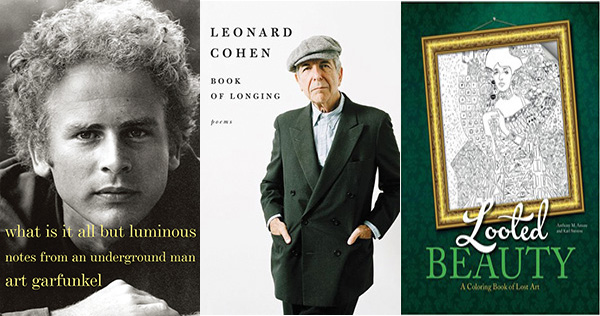 “What is it All but Luminous: Notes from an underground man”
By Art Garfunkel
Alfred A. Knopf (www.aaknopf.com)

Though he has often been touted and entitled “the Singer,” in his new journal of recollection, Rock and Roll Hall of Fame inductee Art Garfunkel takes a much more humble view of himself bringing readers from his middle-class Jewish upbringings to his life-changing role as the Cheshire Cat in a production of “Alice in Wonderland” to his long and storied partnerships with the White Rabbit (stage husband Paul Simon), his “lover” (wife Kathryn), and “the greatest of them all” (director and collaborator Mike Nichols). Along the way, Garfunkel offers personally picked pages of pictures and prose that reveal a great deal of what went on before, behind, and after the time in the spotlight and shows just what a Jewish kid from New York can do with a song in his heart.

As millions of fans continue to long for one more note from their beloved “Rabbi” Leonard Cohen, the dearly departed troubadour has left a farewell love letter in the form of this limited edition collection of original words and images that depict a life’s worth of contemplation about everything from “Alexandra Leaving” to “Your Heart.” Written during a five-year stay at a California monastery and during a series of international travels that eventually took him home to his native Montreal, Book of Longing (the 20-year-later follow-up to his seminal Book of Mercy) serves as a guide to the mysterious mind of a musical genius and also as a guide to living, loving, and longing for those who knew him and those who are yet to have the privilege.

Combining beautiful words with equally elegant illustrations, author/illustrator Vesper Stamper tells a teen-perspective Holocaust story that combines elements of Anne Frank and Art Spiegelman. Following the story of a young Holocaust survivor who is made to spend painful hours in a displaced person’s camp, Stamper takes readers into historically-accurate realms that are rarely explored in such venues. While based on a story of unthinkable loss, Stamper’s heroine is able to find new ways to live and love and an even deeper connection to her Jewish heritage. In the process, she finds a new music in life.

“Toot the Horn”
By Billy Jonas
Bang a Bucket (www.billyjonas.com)

Culling some of the most popular spiritual selections from his international presentations of New Jewish Songs of Joy and Spirit, spirited singer/songwriter Billy Jonas has compiled a collection for PJ Library that offers great Jewish-themed music for young and old. Among the creative combos are Jonas’ popular call-and-response “Tongo” with “Oseh Shalom” and remixes of “Modeh Ani,” “Mi-Chamocha,” and the spiritual “God Is In,” as well as new presentations of the year-starting chant “Rosh Hashanah” from 2015’s Jewish song cycle “Habatya (Homeward).” Among the other highlights are a dance tune about “Tefilla” and “Toot the Horn,” which is perhaps the only song that presents all the major Jewish holidays on one foot. So grab a (recycled) can and spend Hanukkah (or any season) banging along!

“I Am … Books”
By Brad Meltzer
Dial Books (www.bradmeltzer.com)

Though he has lived as many inspiring lives as all of his subjects combined, lawyer/DC Comics artist/best-selling mystery writer/TV producer and host/award-winning children’s author (and dad) Brad Meltzer continues to find even greater successes celebrating the successes of others. In the latest of his “Ordinary People Can Change the World” series, Meltzer turns his happy historian’s lens on Gandhi and progressive pathfinder Sacagawea. Focusing on the life-long values each espoused, Meltzer continues to inspire young and old alike with stories of amazing people who did incredible things with no more ability than anyone else; just passion, dedication, and other attributes anyone can develop within themselves and encourage in others.

While we in Boston know from art thieves (please bring Mrs. Gardner’s paintings back!), perhaps the best-known and most-derided heist was the one perpetrated by the Nazis during WW II. Every year, new pieces emerge that have questionable provenance and that can ultimately be traced through the Third Reich to their rightful owners, many of whom were part of the famed community of Europe’s Jewish collectors.

Combining this intriguing and ever-evolving story with the popular practice of “adult” coloring, art security expert Anthony Amore and graphic novelist and painter Karl Stevens have assembled a collection of mishandled masterpieces. From Cezanne and Degas to Manet and Matisse to Van Gogh and Vermeer, this who’s who of the art world reveals each master’s touch while explaining the path each painting took. As artists learn about each piece and its history, they can create masterpieces of their own.