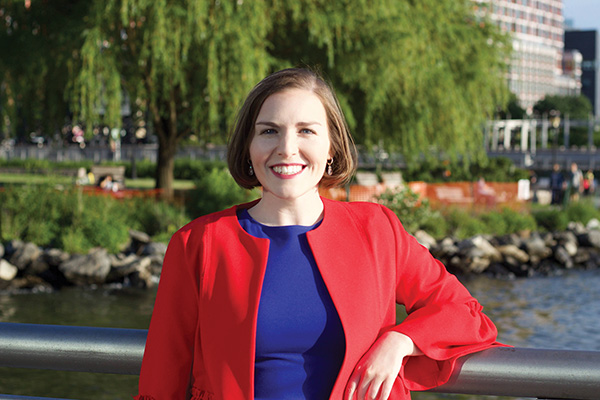 Favorite music: I like a little of everything. I love hip hop, I like alternative, rock. My favorite artists are Justin Timberlake, Beyoncé, and I really like Eric Hutchinson and Muse, Mumford and Sons

Favorite TV shows: “Will and Grace,” “Friends.” But currently I’m watching “Queer Eye” and I’m actually watching this show on Freeform right now called “The Bold Type” and I really really like it … it’s about these three girls that work at a magazine and they’re millennials and obviously it’s very relatable.

Favorite travel destination: London. When I studied abroad there I was living there, and I traveled to other countries while I was there but I spent the most time in London, so that’s definitely my favorite place ever.

Tell me about your Jewish background.
I went to religious school twice a week, preschool at the synagogue, my parents are still involved in the synagogue, Temple Ner Tamid in Peabody. My grandparents on my mom’s side are Holocaust survivors, so that’s always been significant and the driving force, and why we’re so involved.

Has that carried over now that you’re out in the world?
Because of my job, I have to move around a lot, so it’s not like I can settle down and join a synagogue, but I do try and go – if there’s a holiday, I’ll try and go to a synagogue for service or something. I cook a lot of recipes from my mom or my grandmother, so like, little pieces of it are of course still with me, and I think once I’m able to move back to Massachusetts eventually I’ll be able to kind of re-embrace it more observantly or wholeheartedly.

Now you’re in broadcast journalism. How did that start?
Just growing up in school, teachers would tell me that I was a good public speaker and just well-spoken and poised, and I was just constantly watching TV news … and I’m a visual learner so I really enjoy watching a story unfold on the television so I thought that would be a really good way. I’ve always been a storyteller. My friends are always like, if something happens to somebody else and I’m there, “Brittany’s going to tell it. Just let Brittany tell it because she’ll tell it exactly how it happened and she can tell it over and over again and it’ll be the same.” So, at some point, I said ‘I need to combine all my skills,’ so this seems like a good fit.

What’s your career been like?
In college, I got involved in my university station, BUTV, right away freshman year – I was on a news magazine show so right away I could practice talking on camera. And then I got my first job in California, pretty much in Oregon, that’s how far north it is, and I got a really great start there – it helped me get to this job. Talking on TV is never something that I think anyone is 100 percent totally OK with, because people are watching, it’s nerve-wracking, but I know that I have a ton more to learn and I’ll continue to get better at it.

Now I am strictly a reporter and I work for a cable station in New York and I’m a Long Island correspondent, and I do everything. I get my assignment in the morning, and I get in my car with my laptop and my camera and my tripod and I go wherever I need to go and interview who I need to make the story happen, and then I get in my car, my car is my office, and I edit everything on my laptop and do my voice-over and then I put the camera on a tripod and film myself on it, and we get on the news.

Long Island has its fair share of Jews. Have you covered any Jewish stories?
It’s really interesting to be back in such a big Jewish community. One of the first Jewish things I covered here was something for Yom HaShoah – there’s a big Holocaust memorial and tolerance center here in Glen Cove and they do this memorial walk every year, so I was covering that and then last year on Rosh Hashanah – up until last December I was the overnight reporter and worked 2 a.m. to 10 a.m., so I got my assignment on Rosh Hashanah at 5 a.m. and they were like, ‘Oh, we want you to cover security for the High Holidays given the political climate’ – it was just after Charlottesville – so I ended up actually going to a synagogue in Commack and I interviewed the security guard. And then when I was finished, I went in and went to services.

Last year there was a lot of graffiti of swastikas around Long Island, and so I think a synagogue hosted a talk with a police commissioner and some other local Jewish officials just with the community about, ‘How can we feel safer? What can we do to prevent these things?’ It’s interesting to cover things like that because I’m thinking, ‘How do I feel about this as a Jew?’

Will you raise your kids Jewish?
Yes, definitely. I want to give them the same background – celebrating the holidays, going to religious school, being part of the community. I think it helps people turn out OK and turn out in a way that makes them proud and makes their families proud.

What are your hopes for the future?
For myself, my goal is to one day be reporting at a station in Boston. For the world, I really hope that people can start realizing that we’re more similar than different, and once that happens, maybe everyone will stop fighting.