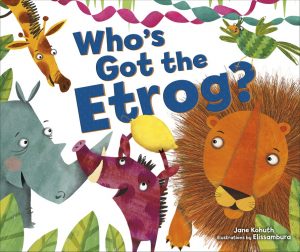 Jane Kohuth, a Holliston-based, award-winning author, was mulling over ideas for a new Jewish children’s book. She played around with a simple piece of verse that appealed to her sense of humor and her love of Sukkot, one of her favorite Jewish holidays.

Kohuth’s books, including “Ducks Go Vroom,” “Estie the Mensch,” and “Duck Sock Hop,” are inspired by a series of words that represent lively sounds. As she put pen to paper, she created a playful story about a woman who invites a group of animal friends as guests to her sukkah.

Several versions later, Kohuth set aside the manuscript. “It wasn’t quite there,” Kohuth told the Journal, explaining that she resumed work on other projects.

A few years later, Kohuth pulled the story out of the desk drawer, eager to engage it again with a fresh set of eyes and new ideas.

Kohuth recalled a program at her parents’ synagogue on the Cape about the Abayudaya, a community of Jews in Uganda. “Why not set the story in Africa?” Kohuth wondered.

That inspiration was the spark to complete her new book, “Who’s Got the Etrog?,” illustrated by Elissambura, a well-known Argentinian artist.

The Sukkot story, recommended for kids ages 4 to 8 and published by Kar-Ben, is one of several new children’s books for the High Holidays, including “Shani’s Shoebox,” an enchanting story by acclaimed Israeli writer Rinat Hoffer (see page 11) that will engage and entertain young readers.

In “Who’s Got the Etrog?,” set in a Ugandan village, a menagerie of animals, from an African warthog to a bushy-maned lion, a fluttering parrot, a dancing rhino, and a long-necked giraffe, join Auntie Sanyo in her sukkah, where they take turns in the holiday ritual of shaking the lulav – a collection of palm, willow and myrtle branches. Each day of the holiday introduces a new guest and a new sequence of rhyming verse brought to life with brightly colored collage-like illustrations. A problem arises when young Warthog doesn’t want to share the etrog, the fragrant, yellow citrus that is part of the holiday ritual.

“They waved the lulav gently. They shook it every way. But Warthog snatched the Etrog! And Camel cried, ‘Oy vey!’”

A surprise ending on the last day will delight kids as Auntie Sanyo’s young niece Sara quietly persuades a stubborn Warthog to share with others. The back pages include a simple glossary and a short explanation about the Abayudaya, whose remarkable and vibrant Jewish history dates back to the early 1900s.

Kohuth emphasized that “Who’s Got the Etrog” is not a Ugandan story, but is informed by the reading she did about the Abayudaya and their religious rituals, and by looking at photographs of the community, including a photo of a sukkah.

Kohuth, who has worked as a Jewish educator, has a deep interest in Jewish diversity.

“There are Jewish communities all over the world, but that breadth of cultures, geography and physical appearance are not often conveyed in stories for children,” she has observed.

As a kids’ book writer, Kohuth is living a life she envisioned as a child. “The first realistic thing I wanted to be was a writer. I would write kids books,” she recalled of her early childhood in Brooklyn. When she visits schools today as a published writer, she shares some of her early notebooks and journals with the kids.

Her family moved to Falmouth when she was a teen and through high school, she considered becoming a rabbi. At Brandeis University, she studied creative writing and Jewish studies. In 2004, she earned a master’s degree in theological studies from Harvard Divinity School. She served as director of Jewish education at a synagogue in Alexandria, Va.

But when she and her husband moved back to Massachusetts, she seized the opportunity to pursue her dream of writing children’s books. She learned all she could about the industry, joined the Society of Children’s Book Writers and Illustrators, and became part of a writers’ critique group.

Her diligence and persistence paid off in 2009, when she sold her first book, “Ducks Go Vroom.”

“It felt unbelievable. It was one of the most exciting things when I got that call that I had sold that book,” she recalled nine years later.

Her next book was “Anne Frank’s Chestnut Tree,” which garnered an award from the National Council for the Social Studies.

Kohuth is looking forward to returning to her role as a Jewish educator this fall at Temple Beth Torah, her family’s synagogue in Holliston, where she lives in a 19th-century home with her husband and their 6-year-old son. Her approach to writing Jewish children’s books brings her back to her own childhood, she said.

“I want to write books that I didn’t have as a kid – books with Jewish characters living Jewish lives.”