by Itamar Marcus
in Opinion 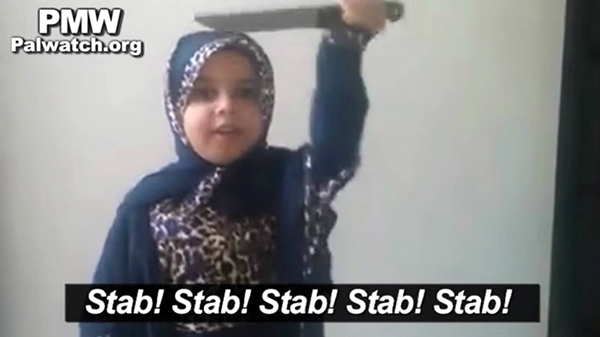 While the Palestinian Authority joined the U.N.’s Convention on the Rights of the Child in 2014, the Palestinian leadership is abusing its own children, presenting terrorists as heroes, “martyrs” as role models, and glorifying the murder of Jews and Israelis.

In the decades of monitoring the Palestinian Authority’s open sources, Palestinian Media Watch (PMW) has exposed that the P.A. Ministry of Education teaches that terrorist “martyrs” are “heroes” and “the crown of their nation, the symbol of its glory, the best of the best.” Official P.A. TV has Palestinian children recite that “Our enemy, Zion, is Satan with a tail,” and that “Jews are the most evil among creations … they descend from apes and pigs.” TV cartoons teach young kids that “Jews work on earth for Satan, to try to destroy Muhammad.”

Sports tournaments, school books, cultural events and even music videos glorify terrorists and encourage Palestinian youth to aspire to kill and be killed.

What we have found in more than 20 years of monitoring the P.A. – through the broad range of institutions and infrastructures that they control – are messages in Arabic of hatred, indoctrination and incitement, while in English, to the world, the P..A, the ruling Fatah Party, and leader Mahmoud Abbas present themselves as moderates who are Israel’s peace partners.

Meanwhile, murderers, such as the infamous Dalal Mughrabi (who in 1978 with a group of terrorists hijacked a bus and murdered 37 civilians, including 12 children) is immortalized by the Palestinian Authortiy naming schools, town squares and community centers after her. Terrorist murderer Baha Alyan (who murdered three Israelis on a bus in Jerusalem in 2015) is used by the P.A. as a role model to promote the value of reading to children. Terrorist murderer, Ahmed Jarrar (who killed Rabbi Raziel Shevach, a father of six, in a drive-by shooting earlier this year) and 13-year-old Ahmed Manassreh, who attempted to murder an Israeli child, are glorified by having sports tournaments named after them.

Palestinian leaders actively encourage distortion of the universal platform of sporting events in this way. In September 2014, Jibril Rajoub, the P.A.’s Secretary of the Fatah Central Committee and head of the Supreme Council for Sport and Youth Affairs, stated that: “Any activity of normalization with the Zionist enemy is a crime against humanity.”

Is it any wonder then, that in the 2015 stabbing intifada, 50 percent of all terror attacks were carried out by teenagers – 10 percent of whom were under the age of 15 years old?

On the day of the matriculation results, WAFA, the official Palestinian news agency published an article glorifying 16 teenagers, who instead of graduating with their classmates died carrying out terror attacks that year. The article stated: “Death as a martyr is the path to excellence and greatness and the path to those who know how to achieve great victory.”

These Palestinian kids are victims. I don’t blame them. They have grown up in a toxic environment, where they have been constantly exposed to messages of hate and terror in every aspect of their lives. Anyone who cares about Palestinians doesn’t want to see their children indoctrinated with these messages of hate. Responsibility for these kids’ actions lies squarely with their leadership, who are profoundly poisoning the minds of these children.

Itamar Marcus is the founder of Palestinian Media Watch.