Each year at Passover, we are reminded that even though the original story is generations old, we are supposed to engage it as if we were the slaves who escaped from Egypt.

A plainly worded Haggadah can leave the children at the Seder table squirming in their chairs until it’s time to find the afikoman. This year, however, there is a new edition, dynamically drawn by award-winning cartoonist Jordan B. “Gorf” Gorfinkel.

While Gorfinkel, who attended Boston University, may be best known for reinvigorating the Batman franchise at DC Comics, he is also called upon to produce custom content for corporations through his own company, Avalanche Comics Entertainment. Each week, fans around the world enjoy his syndicated comic, “Everything’s Relative.” And while he enjoys international acclaim, Gorfinkel makes time every summer to bring his Jewish Cartoon Workshop to Camp Yavneh in Northwood, N.H.

In the new “Passover Hag­gadah Graphic Novel” that came out in January, Gorfinkel collaborated with Israeli illustrator Erez Zadok to present the story of Exodus in brilliant color and with enhanced adventure and intrigue. While every word of the Seder service is included, readers are carried through with the help of one little goat. Combining ancient elements with contemporary characters, the book bridges generations while connecting younger Jews to their heritage. 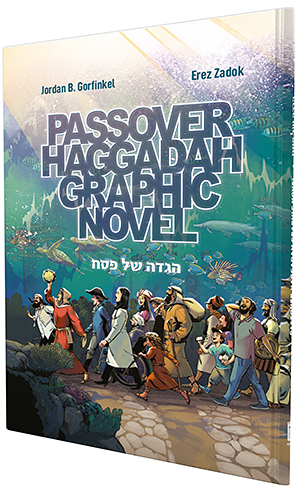 “Adapting the Haggadah into a graphic novel was irresistible,” Gorfinkel said. “Erez and I took every opportunity to draw upon – and literally draw – our rich historical and cultural legacy.”

While some may have difficulty seeing how to leap from Superman to Moses, Gorfinkel sees the link as being as strong as the one between Jewish generations.

“Moses was our first superhero,” he said, noting that he often elaborates on the connection in his readings and presentations.

Gorfinkel said the biggest challenge of the project involved distilling what he sees as “the highlights of Jewish history, custom, scholarship, philosophy, and theology… into a remarkably compact edition with a depth of erudition and longevity that belies its brevity.”

In other words, he said, “The Haggadah rocks!”

Recalling his own family Seders with the popular KTav Haggadah, Gorfinkel has always seen the text as “a gateway to imagination.”

By way of example, Gorfinkel pointed to the Maggid section in which the student runs to tell his master rabbis that the time for the morning Shema has arrived.

“It’s not a block of text floating in a black-and-white sea of continuous scholarly passages,” Gorfinkle noted. “It’s dialogue, spoken by the student … dressed as he would have been dressed, speaking in the place where he would have resided, and immediately you have clarity!”

As the words are not around the pictures but an integral part of them, Gorfinkel is loath to call his work an “illustrated” Haggadah.

“The Haggadah is written in Talmudic-style shorthand,” he observed, “and presumes a level of erudition on the part of the reader that most of us simply don’t have anymore … It contains stories, but it is not a story, certainly not one that conforms to our modern conception of story structure with a beginning, middle, and end.”

“The Passover Haggadah Graphic Novel” orders the pieces to bring a true storyline to the book.

“It provides the first-ever start-to-finish Haggadah story narrative,” Gorfinkel said. “You can read the graphic novel pages of this book for entertainment …while remaining entirely faithful to the original text.”

As the story is easier to follow and more entertaining as well, Gorfinkel hopes that readers of all generations will see their way through the entire Seder.

“We’re commanded to see ourselves in the story, as if each and every one of us is taking the journey today, right now,” he said.