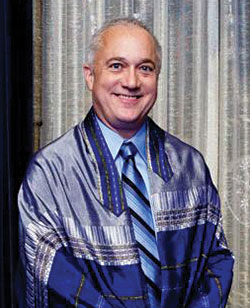 On the afternoon of Rosh Hashanah, some two or three hundred people will take the walk from Temple Emanu-El to the beach down the street to participate in a very ancient ritual known as Tashlich. The word, Tashlich, literally means “casting away” and its usage as name for the Rosh Hashanah ritual of going to a body of water and casting crumbs of bread is rooted in the Biblical text from the prophet, Micah: “You will cast all of their sins into the depths of the sea.” But to discover the true origins of the ancient ritual, we have to go back to the earliest beginnings of our people and their beliefs. Because the ritual isn’t only about casting the bread, it’s also about the water.

“When God began to create the heavens and the earth, the world was unformed and chaotic, and the spirit of God moved across the face of the waters.”(Genesis 1:1) That is how the Torah begins – sensing the presence of the Divine in close proximity to the waters. Early Judaism took over from even earlier religious cultures the belief that prayers recited near water are more effective, and can reach God more readily than at other places. Jewish literature is filled with references to solemn or important events taking place near a river or a well, of temples built at the site of a well; of houses of prayer erected preferably near water; of special ceremonies performed near the water; of occasional prayers offered at a place near water. The Biblical prophets, Ezekiel and Joel each had a vision of rivers of water coming forth from the Temple Mount in the future, messianic times. And perhaps when the exiles of our people sat “Al naharot Bavel, by the waters of Babylon,” weeping and crying to God, they reflected the popular belief that if you wanted to be close to God, even in exile, find a place of water! As the Psalmist wrote: “The voice of the LORD is upon the waters, the God of Glory thunders … over the mighty waters.”(Psalms 29:3)

Long after the people had learned that “the whole earth is full of God’s glory,” the superstitious idea that still seemed to survive held that the waters were the dwelling place of evil spirits which had been downgraded, as it were, by the supremacy of the God of Israel. These diminished spirits took up residence in bodies of water, as well as in the deserts and wastelands. They were never considered as powerful as the Almighty God, but they needed to be considered potentially dangerous nonetheless. And so we find, from early times, through the Middle Ages, and even, in some places, well into the Enlightenment, people would offer some gifts to the spirit dwelling in the river or lake near their town.

If they considered him a friendly spirit, it was an expression of thanks for his favors. If it was an evil spirit, the gifts were intended to appease him. The practice of tossing food into the water as a gift to the demons which lived there was regularly condemned by the Rabbis, of course. But that never stopped the people from continuing to do so, believing that such practice might bring them good fortune for the New Year.

Despite the superstitious origins of this custom, I think it’s authentic and valid for us, particularly as adults, to recognize and to admit that to some extent or another, we’re really going to the waters to feed the demons. For indeed, there are demons that are abundant in our own lives which lead to the missteps and mistakes, regrets and failings that we hope to toss into the depths of the waters. True – the demons don’t live at Preston Beach, or in the depths of the ocean, lakes and rivers around us. But they do exist. They live in every one of us, and I can name some of them for you, even though we each have our own, private assortment. Their names are Arrogance and Selfishness. Prejudice and Ignorance. Jealousy and Addiction. Impatience and Egotism. Suspicion, Fear, Apathy and Doubt. These are the demons that lead to the very sins we hope to discard as crumbs of bread are tossed into the waters. When we recognize that they exist, and that our less than ideal behaviors result from succumbing to their allure, only then can we move beyond their grasp, and begin to reclaim our lives in the light of our highest values, and grow towards the most elevated vision of who we might wish to become.

At the same time, let’s also acknowledge, and feed as well, the kindlier spirits which are also parts of our human make up: the spirits of Kindness and Compassion, of Patience and Gratitude, of Generosity, Courage and Love. May our nurturing of these qualities help bring blessing to us for the New Year ahead.