by Rabbi David Cohen-Henriquez
in Opinion 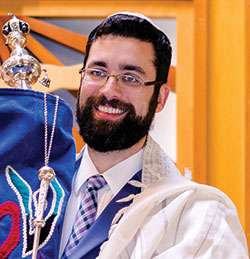 The name “Hanukkah” refers to the rededication of the Temple in Jerusalem – the center of Jewish spiritual practice and symbol of our national independence and identity, after having being occupied and totally desecrated by the Greco-Assyrian Empire in the year 165 BCE.

After three years the Jews reclaimed Jerusalem and the Temple.

It is here when we shift the political and military origins of the holiday to its miraculous element: Among the destruction and defilement of the holy objects and utensils of the temple, the returning Jews found a single remaining jar of pure and undefiled olive oil, consecrated and for the exclusive purpose of lighting the Holy Candelabra.

We talk about the miracle of Hanukkah as the supernatural ability of this jar of oil to last for eight days. However, sharp Jewish observers, including our own sages, have noticed we are, technically, talking about seven days of miracles. The first day is not really a miracle – it was the natural expected span of the oil and the lights. What is the miracle we celebrate on the first day?

The first day miracle was the initiative of the returnees, of those Jews who still kept the faith of finding something meaningful remaining after everything had been destroyed. To have that faith to keep looking for some remains of the holy among the defiled world, that is perhaps the most miraculous of miracles.

God can make the sun shine for billions of years; seven days of a kindled bronze menorah was an “easy” miracle.

That faith and human desire to keep looking for the holy, even when all we find or remains seems as insignificant as a flask of oil, is the essential message of Hanukkah.

That is why the menorah and lighting the candles became the holiday’s symbol and main ritual object.

They are here to remind us of the faith and courage that it takes to reclaim our Judaism and our Jewish communities worldwide after having been voraciously destroyed by our oppressors and our enemies over and over again for millennia.

When the light of the candles is reflected in your eyes, you are simultaneously witnessing and becoming an embodiment of the miracle of Hanukkah: the miracle that it is to continue being Jewish, to continue trying to bring light into a dark world, even when all you are is an impossibly small chance against the odds.