Marblehead residents ask: Why did it take so long to uncover police swastika incident?

It took over a year before the police chief learned that an officer had allegedly carved a swastika into another officer’s car.

MARBLEHEAD – Dozens of residents and the Marblehead Racial Justice Team are demanding answers about an incident involving a former town police officer who allegedly scratched a swastika into another officer’s personal vehicle.

The incident is alleged to have happened in late June/early July of 2019, but the police chief only found out about it more than a year later – in mid-November 2020 – and the public wasn’t made aware of it until a month after that. Residents want to know why it stayed secret for so long.

Officer Timothy Tufts had been on paid administrative leave since Nov. 20 until his resignation, which Marblehead police Chief Robert Picariello announced on Dec. 16.

“I think the unknowns and 18 months that somebody knew the event took place and it took so long … to get to the chief. It’s worrisome,” said Marblehead resident Megan Sweeney. Sweeney wondered if an existing institutional environment prevented the incident from coming to light sooner.

She was one of more than 50 residents who wrote to the Board of Selectmen last month, requesting more details about the hiring and training of officers; changes to the department’s policy on reviewing social media of applicants and employees; the selection of a new chief (Picariello is retiring in July); and asking 26 specific questions about the swastika incident. 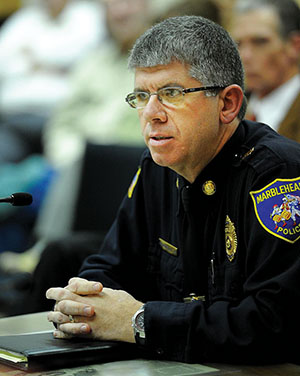 “That this incident was not publicly disclosed for many months and that the officer was not fired and charged with a crime is deeply troubling,” the letter from the Racial Justice Team read. “Anti-Semitism and racism in all their forms must be met with swift and decisive action if Marblehead wants to claim truthfully it is ‘no place for hate.’”

Picariello, who has expressed his dismay about the incident, said he had spoken with Robert Trestan, the executive director of the Anti-Defamation League New England, about future training for officers. He pledged an outside review so the department could learn from the incident.

Town Administrator Jason Silva told selectmen Jan. 27, during a Zoom meeting broadcast on local cable TV, that the investigator, Winthrop Police Chief Terence Delehanty, who is also an attorney, had been given “broad latitude” to conduct the investigation.

“We’ve told him to follow the facts and really be independent from any of us,” said Silva, who said the investigation is underway. Silva said the town has been careful about not giving a deadline for the review.

“We actually want it done when it’s done,” said Silva, who did not respond to an email request for more information from the Journal.

“I had absolutely no knowledge of this event until it was brought to my attention in November,” the chief said. “It was handled properly when we found out about it.”

In December, Picariello said he had learned it appeared another officer stuck a crushed-up can under a windshield wiper on Tufts’ car. Tufts is alleged to have taken the can and used it to scratch the swastika into the other officer’s car. Neither officer is Jewish, so the department does not intend to seek a hate crime charge against Tufts.

Picariello said he followed proper procurement procedure in hiring Delehanty’s firm, LEADS, which stands for Law Enforcement Applications and Development Strategies, to conduct the outside investigation. The chief does not expect the cost to exceed the $10,000 threshold, above which the department would have to issue a request for proposals.

Delehanty previously referred questions to Picariello, and he did not respond to a Journal email requesting information about the firm and its track record on such investigations.

Sweeney and other residents also have raised concerns about whether Delehanty can be impartial, given possible professional relationships among local police chiefs.

“It’s that separation,” Sweeney said. “If we want an objective investigation, it puts our chief and the other chief in an awkward position.”

“I have the utmost faith in Delehanty’s integrity,” said Picariello, who said he has asked the town’s labor counsel to manage the investigation moving forward.

Jackie Belf-Becker, chairwoman of the Board of Selectmen, defended Picariello’s actions at the Jan. 28 meeting. “We know that the delay in discovering this incident may raise questions for some,” said Belf-Becker. “But as soon as Chief Picariello was notified of this situation, he began the process of investigation.”

Helaine Hazlett, cochairwoman of the Marblehead Task Force Against Discrimination, said she was saddened by the incident, but has faith in Picariello.

“It’s disturbing and disappointing, and in that vein, I have every faith in our chief,” Hazlett said. “He acted immediately. I feel he did all the right things.”

Hazlett said Delehanty comes highly recommended “by several sources who have used his services for similar types of things and I think we as a community need to have faith in the chief and have some patience and wait for the investigation.”

But another resident, Sherry Gagne, was unconvinced and told the Board of Selectmen she was outraged by the incident. “Anti-Semitism and racism are systemic and it’s embodied in our systems and our political systems and the ways the systems function together as a whole,” she said.

Story has been updated to correct the date of the Board of Selectmen meeting.

Have a news tip? Email Ethan Forman at forman@jewishjournal.org.

Doctors work to get residents vaccinated for COVID

Doctors work to get residents vaccinated for COVID

The Jewish Journal Is Here For You.

Your contribution supports our efforts to publish independent, local news from a Jewish perspective right here in the greater Boston area.

The Jewish Journal Is Here For You.

Your contribution supports our efforts to publish independent, local news from a Jewish perspective right here in the greater Boston area.