‘Free as a Jew’ author to discuss her memoir Nov. 7

by Shelley A. Sackett
in News

Ruth Roskies Wisse is no shrinking violet. Born in Czernowitz, Romania, in 1936, she and her family escaped to Montreal in 1940, where her parents’ home became a salon and safe haven for Jewish writers, actors and artists who had also fled the Nazis.

After graduating with a bachelor’s degree from McGill University in 1957 (where she befriended Leonard Cohen), she earned a master’s degree in Yiddish studies at Columbia University in New York, the only place in North America that offered such a program at that time. She returned to Montreal to raise her family and finish her Ph.D.

No less a trailblazer academically, Wisse began teaching Yiddish literature in 1968 and helped found a program that would become the Department of Jewish Studies at McGill.

She became a joint professor in the Departments of Yiddish and Comparative Literature at Harvard University in 1993, where she taught until she retired in 2014. Her gender, religion, subject matter (Yiddish) and conservative political and social views set her apart from the get-go. Her razor-sharp intellect and prolific authorship made her views impossible to ignore.

In 2000, she received the National Jewish Book Award in Scholarship for “The Modern Jewish Canon: A Journey through Language and Culture” and in 2007, she received the National Humanities Medal, which cited her for “scholarship and teaching that have illuminated Jewish literary traditions. Her insightful writings have enriched our understanding of Yiddish literature and Jewish culture in the modern world.”

Along the way, she developed relationships with Nobel Prize-winning authors Saul Bellow and Isaac Bashevis Singer, and a multitude of Harvard University students, faculty and administrators.

A staunch neoconservative and supporter of Israel, Wisse is a prolific author. She has collaborated on Yiddish collections, penned numerous political essays (many of which appear regularly in Commentary, The New Republic and The Jerusalem Report), and authored several books, including the controversial “If I Am Not for Myself … The Liberal Betrayal of the Jews,” a Zionist critique of the American Jewish climate. 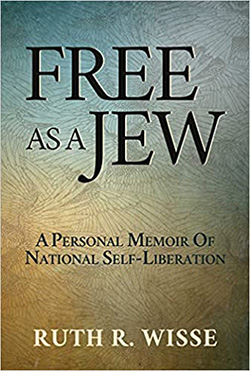 No less controversial is her new book, “Free as a Jew: A Personal Memoir of National Self-Liberation,” a no-holds-barred memoir. Wisse will discuss her book with Andrea Levin, executive director and president of the Committee for Accuracy in Middle East Reporting and Analysis (CAMERA), as part of the JCCNS Jewish Book Month Speaker Series on Sunday, Nov. 7 at 3 p.m. at Temple Emanu-El, Marblehead. The in-person event includes a reception and book signing.

“Don’t miss the opportunity to hear Ruth Wisse speak, an eloquent voice for the Jewish people, especially during this time of runaway antisemitism. Her memoir, in essence, poses the question if we’re not free to be Jews in America, then where? The conversation between Andrea Levin of CAMERA and Ruth Wisse, friends and colleagues for 40 years will be compelling,” said Sharon Rich, a member of the Jewish Book Month Committee.

According to Wisse, she began writing about parts of her life as a way of understanding the world around her. “Free As A Jew” takes her to the point of her retirement from Harvard in 2014.

“One of the ways in which I’ve been fortunate is in the interesting people I’ve come to know. I’ve tried to write this as cultural history, and about myself as a minor participant in that history,” she said by email.

She chose the title carefully and deliberately. “I call it a personal memoir of national self-liberation because I concentrate on the public, intellectual, cultural and political events I witnessed: most extraordinarily, the re-establishment of a sovereign Jewish country. The defeat – at least formally – of German fascism and Soviet communism were great victories.

“Not for a moment can we afford to take those civilizational achievements for granted,” Wisse said. “But they are being taken for granted.”

The direction of current political and cultural life concerns Wisse, particularly the uptick in antisemitism and anti-Israel rhetoric and what she calls “contemporary loss of confidence.”

“It is no secret that the ideological and military war against the Jewish people has in many ways revved up rather than quieted down in recent decades. When people are under assault, many grow frightened, or apologetic, wanting to stay out of trouble. Some respond by trying to appease their attackers, or by becoming more like them. Jews have many things in common with other minorities, but no other minority is under the same sustained attack. This is confusing. Many lose confidence in their Judaism and blame their fellow Jews for the attacks against them,” she said.

Wisse stresses that her memoir is intended as neither a homily nor a “how-to” book, but rather as another tool in one’s toolbox. “In explaining how I came to think about certain things, like the modern challenges to women, the nature of community, liberalism and conservatism, how literature works and why it matters, education and Jewish education, and so on, my story may be useful to others. No two lives are alike, but we all tend to have certain problems and opportunities in common,” she said.

The Exodus story of the Jews leaving slavery in Egypt for freedom in Canaan particularly resonates with Wisse and also influenced her book’s title. “Jews learn that escape from bondage is only the first step of the process. We are a rabble – miserable, needy and anxious – until we accept our pretty stringent set of laws. To be free as a Jew means to assume the responsibilities of freedom and to realize how liberating that really is,” she said.

For more information and to buy tickets, visit jccns.org.