by Steven A. Rosenberg
in Arts & Culture

Rabbi Bernie Horowitz (top row, center) with his wife, Anita (to his left), and family.

Bernie Horowitz is the associate rabbi at Temple Ner Tamid in Peabody. He grew up in Everett and Malden, went to Northeastern, and formerly owned a kosher meat market in Malden before leading Peabody’s health department and emergency management department. After retiring, he became a rabbi. Bernie and his wife Anita live in Peabody. His daughter Cara is married to Joshua Kepnes, and they have two children, Ari and Naya. His daughter Cassie married Jeffrey Bruner and they have two daughters, Leah and Kayla.

Can you tell me about your upbringing, where you grew up and your family background?

When people ask me where I grew up, I say Malden. I moved there from Everett when I was 12 and I graduated from Malden High in 1971. When I was about 6, my mom – who was the spiritual mover of the family – decided to become Orthodox. Everett was the place of my formal Hebrew education. My dad was a meat cutter and worked every day for various butchers. My mom volunteered for the Sisterhood at Temple Tifereth Israel in Everett. We went to Hebrew School from Sunday through Thursday and were required to attend Junior Congregation on Shabbat mornings. Fortunately, we lived across the street from the Shul/Community Center/Hebrew School. It was one building then, on Union Street. I was always the first one there. The Hebrew school teacher, the late Mr. Solomon Zam (who was also a cantor) was also the bar mitzvah teacher. He did his lessons before the start of Hebrew school so I heard everybody’s lessons. By the time I was 11, I learned the entire trope and could do any haftarah. It also helped that God blessed me with a good voice and very good Hebrew reading skills. Since I could sing, I was always asked to lead Junior Congregation services. So I guess you could say I’ve been leading services since I was in the second grade.

During summers my dad worked at Shefschik’s Kosher Market in Old Orchard Beach, Maine. There were tons of Jewish families then; however, I was the only boy who attended Shabbat morning services. I was exposed to new melodies and prayers and was often asked to end the prayer service.

Malden was a different experience. It had a vibrant Orthodox community as opposed to Everett, which was changing over to the Conservative Movement. I went to the Young Israel of Malden, where I met observant teenagers. The members there quickly had me doing various davening tasks. At that time, my dad became Shomer Shabbos and a business partner with Michael Glick at Glick’s Kosher Meat Market on Salem Street in Malden. Once I got my driver’s license, I became the delivery boy. Eventually my dad became the Young Israel’s president.

How did your formal Hebrew school lessons continue after Everett Hebrew School?

Regarding my formal Hebrew schooling, it didn’t end with Everett Hebrew School. My parents gave my sister and me an option to go to Maimonides or to Hebrew Teachers College (HTC), the high school Prozdor Program. We chose HTC. Between HTC – which was more a literary school learning Hebrew language, modern Jewish history and culture – and the Torah I was learning, I was getting a well-rounded Jewish education.

At HTC I met Jewish friends from Brookline, Brighton, Newton, Framingham and Sharon. My high school social life revolved around my HTC friends. Every Saturday night I’d drive to Coolidge Corner where my friend Nessim lived. He always managed to find us a party with Jewish teens. I also slept over at his house for certain Jewish Holidays. Brookline was the hub for Jews. It was great to be part of that environment, especially during holidays like Simchat Torah. We were dancing in the streets.

How did you meet your wife, Anita?

At 20, I told my dad I didn’t want to be the delivery boy anymore. The last evening I worked, I delivered at a home where the customer was going out with a couple of friends, one who happened to be Anita. As I was leaving, I noticed her outside waiting for her friends. I had to take a second glance because she was absolutely gorgeous. She still is! The next day was hot. I went to Punk’s Corner at Revere Beach. When I sat down a girl next to me asked if I worked for a butcher in Malden. It was Anita. She remembered me and the Magen David around my neck when I came out of the customer’s house. I recognized her as well. If that’s not bashert I don’t know what is. We talked and laughed the whole day. I asked her out; we got married a few years later.

You went to Northeastern, what did you study there?

I went to Northeastern and studied psychology. I wanted to learn about people’s behaviors; what made them tick and what motivated them to make certain decisions. I thought eventually I would get a job in a personnel department for a large corporation. I took some courses at HTC as Northeastern accepted their credits; however, I had no intention of going into a Jewish profession like teaching or becoming a rabbi. I did, however, accept cantorial jobs as Baal Shacharit for the High Holidays at various shuls in the communities I lived in and I filled in for cantors and rabbis at senior living centers like Brooksby and Aviv. 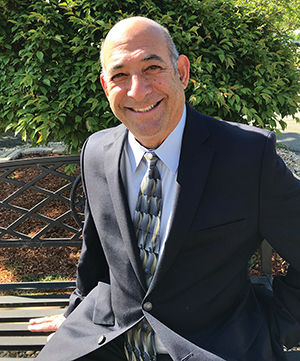 You worked for the city of Peabody?

I bumped into a previous customer who worked at Peabody City Hall. She asked me what I was going to do. I said, ‘become a real estate agent.’ She said, ‘I heard the health inspector is retiring. Go see the mayor and tell him you’re interested in the job.’ So, I went home, put on a suit and saw the mayor. Of course, he didn’t have a clue who I was. However, after several interviews I got the job (and I got my real estate license, too). I worked my way up to being the director of the health department and I became the emergency management director as well.

What made you want to become a rabbi, and can you explain your journey toward the rabbinate?

One day in the spring of 2000, a congregant asked me if I would be interested in leading High Holiday services at Congregation Sons of Israel in Peabody. It was something I never did before – playing the rabbi’s role. At first I declined, but eventually I accepted the challenge. It proved to be a pivoting moment in my spiritual career as it connected me with a congregation that needed my set of skills at that time. After the ritual director became ill, I stepped in and started running all the services; Shabbat, Yom Tovim, High Holidays, etc. It was a modest-paying job. I did that for about 13 years. During those years I started studying Torah in more detail because every time I stood on the pulpit I gave a D’var Torah. I didn’t want my talks to be shallow and I wanted to share new insights with the congregants. I read Rashi, Raphael Sampson Hirsch and Jonathan Sacks, to name a few. That’s when it occurred to me I needed more. I wanted to know what rabbis know. I didn’t necessarily want to become a “rabbi” per se, although everybody kept telling me I should be a rabbi and that it was my calling.

In 2014 I left Sons of Israel to begin my personal spiritual journey. I found the “Jewish Spiritual Leaders Institute,” an online course, advanced for its time. It follows a “Universalism” approach, accepting everyone … quite the change from my Orthodox upbringing. We had 10 in our class, a mix of Conservative and Reform educators and cantors and a converted priest. One of the most important things I learned was that my way isn’t the only way; it’s another way. Everybody has a different point of view yet they all can be just as close to God as anybody.

Shortly after I was ordained, Temple Ner Tamid was contemplating what to do after their rabbi wanted to go back to Canada. One member said, ‘Hey, Bernie became a rabbi. Let’s ask him to be the part-time interim rabbi while we decide what to do.’ Since I knew most of the members already, I liked the idea and accepted the position until after they hired Rabbi Perlman.

Tell me about your connection with Temple Ner Tamid.

My first experience with Ner Tamid was around 1982 when we moved to Peabody. I already knew many of the members as customers in my kosher meat market that I took over after my father passed. Even though it was a Conservative Temple, it was traditional enough for me. I attended regularly and my wife and I became active in many of the committees and board of directors.

After a couple of years, Rabbi Perlman wanted to introduce a fairly new concept to TNT of a senior rabbi and an associate rabbi who can also double as a cantor to share pulpit and teaching duties. He came to me and without hesitation I accepted. Working at Temple Ner Tamid has been so rewarding for me in many ways. First, the members are family and friends. I knew many of the members since high school from Everett, Chelsea, Malden and Revere. I even went to HTC with some of the members. I used to share a cab home from HTC with our president Adele Lubarsky. Secondly I’m blessed to be working with Rabbi Perlman. There’s no ego on the pulpit. He looks at me and motions to chant a prayer; I look at him and motion to say a reading. He sings high, I sing low. He does this, I do that. It’s a true partnership and we enjoy what we’re doing.

What do you feel are your challenges ahead?

If one was to ask me what lies ahead, I say the biggest challenge of all. As it says in the Shema, “You shall teach your children diligently at home and away, night and day.” I have four grandchildren. If I don’t personally take responsibility to make sure they have a Jewish upbringing, then who will? Their parents are doing a good job, but I’m going to be sure I express myself whenever necessary and share my knowledge of Jewish law and customs whenever I get a chance. The Lappin Foundation sends teens to Israel to help rejuvenate their Jewish spirit with a theme of raising their children Jewish. I’m not waiting until my grandchildren are 16. I started now and will continue to do so … as we all should, “Im Yirzah Hashem.”