‘Who will light the candles when I’m gone?’

‘Who will light the candles when I’m gone?’

Mark Murstein, 98, was born in the Polish village of Pieski and orphaned during the Holocaust. He lost his mother, father, brother, grandmothers, aunts, uncles, cousins – so many family members that his daughter, Regina Daley, buys Yahrzeit candles for him in bulk when they go on sale after Jewish holidays.

“But who will light the candles when I’m gone?” he reflects sadly, seated on a park bench in Brookline near the condo he shared with his wife of 56 years, Bella, a fellow survivor.

Bella was taken from him in 2015. Sometimes he asks his daughter: Who will say the prayers?

Murstein is hardly alone among aged Holocaust survivors in pondering such questions. But this week they have particular resonance. On April 28, Yom HaShoah – Holocaust Remembrance Day – will commemorate the memory of the millions of Jewish victims of the Nazis, and also remind the world of the most systematic mass murder in modern times.

In Israel, flags are lowered to half-mast and the country comes to a standstill when a two-minute siren is sounded at 10 a.m. At memorial events across the U.S., candles are lit and prayers are recited, as survivors recount their Holocaust experiences. “If we don’t tell our stories, then it didn’t happen,” said Henry Slucki, 87, of Los Angeles, a child survivor of the Holocaust who gives one or two presentations every week.

Slucki is one of 100 survivors around the world who contributed his voice to the 100 Words project, a powerful new video op-ed made by 100 survivors across the globe, asking the world to stand with them and remember on Yom HaShoah.

It was produced by the Conference on Jewish Material Claims Against Germany, or Claims Conference, which handles claims on behalf of Jews who suffered under the Nazis.

“I feel I have to be a messenger of peace and service,” said Magda Bader of Chestnut Hill, who suffered the horror of Auschwitz where her parents, a sister, and a niece perished in the gas chambers. At 92, her schedule for April includes talks at a high school, a college and a library. “People need to know what they can do to help each other, to live with each other in peace, to not prejudge or hate.”

But who will tell these stories when they’re gone? The question seems to haunt this day of commemoration more and more each year, as the number of survivors dwindles rapidly. There were about 140,000 Jewish Holocaust survivors in the United States in the years immediately after the war, according to William B. Helmreich in his landmark 1992 book “Against All Odds: Holocaust Survivors and the Successful Lives They Made in America.”

Today there are about 50,000 survivors in the U.S., with the youngest in their late 70s and the oldest believed to be 104, according to the Claims Conference.

The majority live in New York, California or Florida, with some 3,000 in Massachusetts, according to Jewish Family & Children’s Service. Their numbers are shrinking and their absence is palpable. At Facing History & Ourselves, a global education organization, Holocaust survivors’ testimony has long been a foundational part of its program, but today the numbers of participants “are few,” said Pam Haas, executive director of the New York office. “Anyone who is speaking was an infant at this point. Many of them were hidden.”

In the last two years alone, Massachusetts lost two survivors at the forefront of Holocaust education – Stephan Ross, 88, who founded the New England Holocaust Memorial, and Izzy Arbeiter, 96, who shared his experiences with thousands of young Germans and was honored by the German government.

“For a while, my dad’s major activity was going to funerals,” said his son, Jack Arbeiter.

Adding weight to the importance of witness remembrance are two sobering national studies. The Anti-Defamation League announced this week that it recorded a record number of antisemitic incidents for 2021 across the U.S., including 88 assaults against Jews – a staggering 167 percent increase from the previous year. [see related story on page 13]

And a 2020 survey of Millennials and Generation X by the Claims Conference found a shocking lack of basic awareness of the Holocaust among adults under 40. More than 1 in 10 respondents couldn’t recall hearing the word “Holocaust” before. Sixty-three percent didn’t know that 6 million Jews were murdered; almost 40 percent thought the number was less than 2 million. Nearly half the respondents could not name a single concentration camp or ghetto. And 11 percent believe that Jews were responsible for the Holocaust.

Abraham Foxman, former national director of the Anti-Defamation League, was horrified this week to learn that an e-commerce site was selling leggings that sported images from Steven Spielberg’s Holocaust drama “Schindler’s List,” including one of a train leading to Auschwitz. Foxman is a survivor himself: Born in 1940, his life was saved by a Polish Christian nanny who hid him and had him baptized.

“As the years go by and memory fades, trivialization increases, aided and abetted by misinformation, disinformation and politicization,” said Foxman, who is speaking at four Yom HaShoah events, including at Brandeis University Hillel on April 28.

Add to these concerns the recent wave of antisemitic incidents across the country, the growth of far-right extremism across the globe, and a war in Ukraine that for many survivors has echoes of the Holocaust. “It seems to me that Putin is trying to imitate Hitler,” said Eric Kahn, 92, of Swampscott, who was deported with his father and brother to Theresienstadt. “Hitler wanted to create a big Germany. Putin is trying to establish the old Bolshevik empire.”

“Look what happened on January 6. The mob – it was just like the Nazis,” said Amely Smith, 95, of Peabody, who was born in Koenigsberg, Germany in 1926, witnessed Kristallnacht, and fled with her parents to the U.S., only to narrowly skirt death on the ocean when German bombs rained down on their ship.

“Look what’s happening in Ukraine, at how a single man can do so much damage,” she said. “Killing people and leaving them on the street. It’s the same thing. It can happen again and again. This is why I make speeches as much as I can.”

Their need to tell stories seems existential. Sam Bak, the celebrated artist who lives in Weston, has spent his life creating thousands of allegorical paintings inspired by the wartime horrors he experienced as a boy in the Vilna Ghetto. At 88, he continues to paint these images of destruction.

“I paint the same subject in the same mood and the same style,” he said. “My story is my story. I cannot invent something I am not.”

Survivors “often feel they are the last link to the world that was destroyed,” said Greg Schneider, executive vice president of the Claims Conference.

“They remember the shtetl they came from and they remember their grandparents and the butcher and what Shabbos was like. Everyone else is dead: Imagine you are the last living person who knows anything about that town, that place, your family. It must be a very isolating feeling on the one hand, and on the other, a huge responsibility to be sure the legacy of those people is on your shoulders.

“Imagine thinking, ‘In my final job, I did not do a good enough job of remembering.’ There is survivor guilt to begin with, now there is the guilt that my whole life had one obligation – to live up to my legacy – and I am in my final years. Think of how frustrating this must be in a world that is increasingly disinterested.”

These stories are not easy to hear, or to tell. Survivors are not single-story people – their histories are often tangled and complex tales of survival and loss, replete with details of unimaginable encounters, brutality, roundups, ghettos, lice, suicides, goodbyes, grave-digging, death marches, sadism, typhus, starvation. Riding in cattle cars. Riding on cattle cars.

There are details that will forever go missing: Mark Murstein will never know how he lost his grandmother on a cattle car somewhere near Belarus. “Did they kill her? Did she fall out?”

And there are details that will never go away. When she was a girl, Magda Bader’s family was forced to march from a ghetto in their Hungarian town to a brick factory outside the town. It was a hot day in May: her 85-year-old grandfather fell and was beaten by a guard with a dog. Her mother tried to help him get up, but was forced to leave him. “That was the last time I saw him,” said Bader, her eyes filling with tears.

But even as these survivors bear witness, a question remains: What are they bearing witness to? 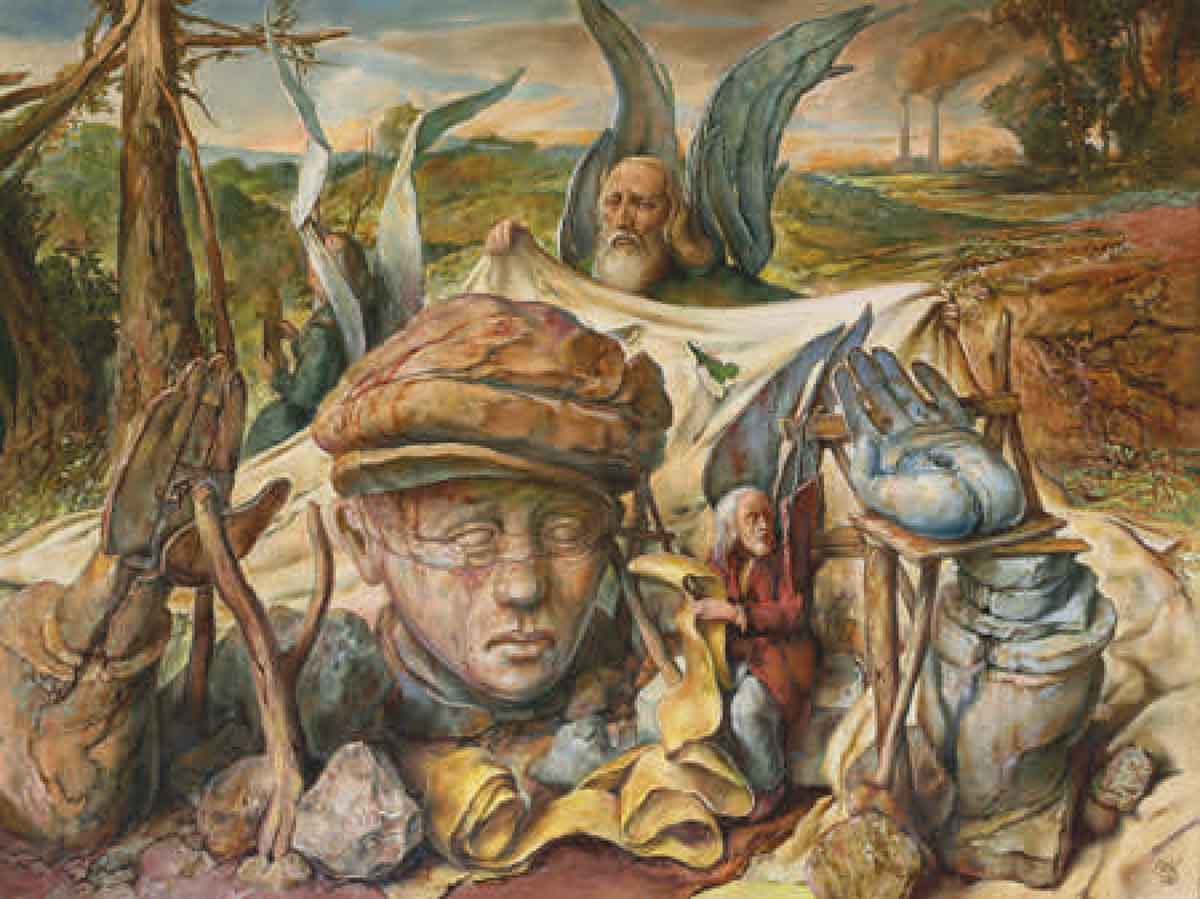 For Sam Bak, it is a dark view of human behavior. “People get used to peace,” he said, “but the real state of mankind is probably war. Every one of us can be the best, and the worst.”
For Abraham Foxman, the lessons are more encouraging. “The lesson is not the hate and brutality,” he said. “It is that people can make a difference by standing up and saying ‘no’. So what do you bear witness to – the ugliness or the beauty? It’s not that I neglect the horrors, but I embrace the heroism.”