by Steven A. Rosenberg
in Arts & Culture

Hannah Solomon and Brett Ponn have known each since they were young students at the Jewish day school now called Epstein Hillel in Marblehead. Brett, who grew up in Lynnfield, is a year older than Hannah, a Marblehead native. Then in high school, they went on the same Youth to Israel trip in 2010. But then they didn’t see each other again until 2017, when each enrolled in a Combined Jewish Philanthropies “LEADS” social group.

“We were paired up in groups of two and we were asked to share our Jewish story with one another, and Hannah and I were linked up,” said Brett, who works in sales for a Woburn rubber manufacturing company and is the son of Debbie Mendelson Ponn of Danvers and David Ponn of Lynnfield. “Our stories were almost identical – with us going to Hillel and visiting Israel and having a similar upbringing with our parents. So that was really kind of what set everything in motion, just hearing and explaining to one another how similar our upbringings were. And from there we started talking more regularly.”

Separately, Brett and Hannah mentioned to two close friends that they had a crush on one another. Their friends couldn’t keep a secret though, and decided to tell Brett and Hannah individually.

“And then Brett asked me on a date,” said Hannah, who also works in Woburn for an event rental company, and is the daughter of Karen and Steve Solomon of Marblehead. “We got a drink at City Tap, and we walked around Boston for, like, hours and ended up sitting at a park bench by the North End until 2 in the morning. And I don’t think we’ve gone a day without talking since that point.”

“I knew from the first date that I was going to end up marrying her. I called my grandpa the next day and told him. She was just so sweet, beautiful, and kind,” said Brett. “I was just so comfortable around her. I was just never nervous. I knew that we were always going to have a good time and that we were on the same page and viewed the world similarly, and I was with someone I felt comfortable being with and I always looked forward to spending more time with her. 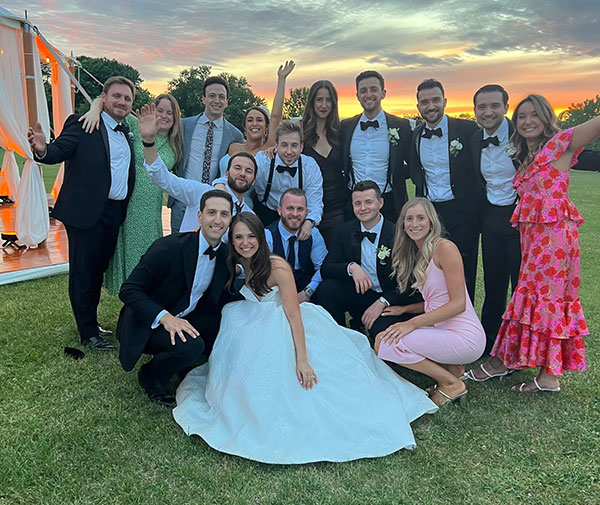 “I think what drew me in, was first off, just how similar our lives were – that we really didn’t have to explain much. We can read each other without speaking, in a way. I think that was a huge part of it. We are extremely similar people, we value the exact same things, and we enjoy the same things,” said Hannah. “We both value family the same way and we both value our commitment to the Jewish community the same way.”

Three years later, Brett decided to propose to Hannah on Thanksgiving in Chicago. But two days before the big day, Brett learned he had COVID, and just a couple days later, Hannah also tested positive. The couple then began an 18-day quarantine period in the basement of Brett’s aunt and uncle.

“I gave my cousin the ring and she just held onto it for the 18 days that we were quarantining,” said Brett. “It sounds like it was pretty bad but me and Hannah made the most of it and had such a great time together and that’s how I knew we were ready to get married.”

After they tested negative, they prepared to fly back to Boston. But on Dec. 9, 2020, on the way to the airport, they decided to stop at his grandparents’ lake house outside Chicago. “I told Hannah I wanted to stop and say hi to my grandparents before we went to fly home and when we stopped at their house, I took her out to the lawn and proposed in front of the water with my grandparents there,” said Brett.

“It was great. I was surprised, and for some reason we got a beautiful day in December, no jackets needed. And we ended up flying back to Boston that night,” Hannah recalled.

Eighteen months later, on June 11, 2022, 190 guests arrived at Garland Field in Ipswich for the wedding. The chuppah was outside, and a tent with a dance floor was erected for the reception. Hannah wore a white strapless ball gown, and Brett decided on a traditional black tuxedo. The couple’s young nephews and niece acted as the ring bearers and flower girl, while Cantor Sarah Freudenberger of Congregation Shirat Hayam in Swampscott officiated. Brett’s brother, Jeremy, served as best man, and Hannah’s close friend from summer camp, Victoria Sorkin, was the maid of honor.

It was a traditional Jewish wedding ceremony, with the couple wrapped in Hannah’s late grandfather Mickey Solomon’s tallis during the seven blessings, which were recited by their aunts and uncles. They also used the same Kiddush cup that Hannah’s parents sipped from at their wedding. 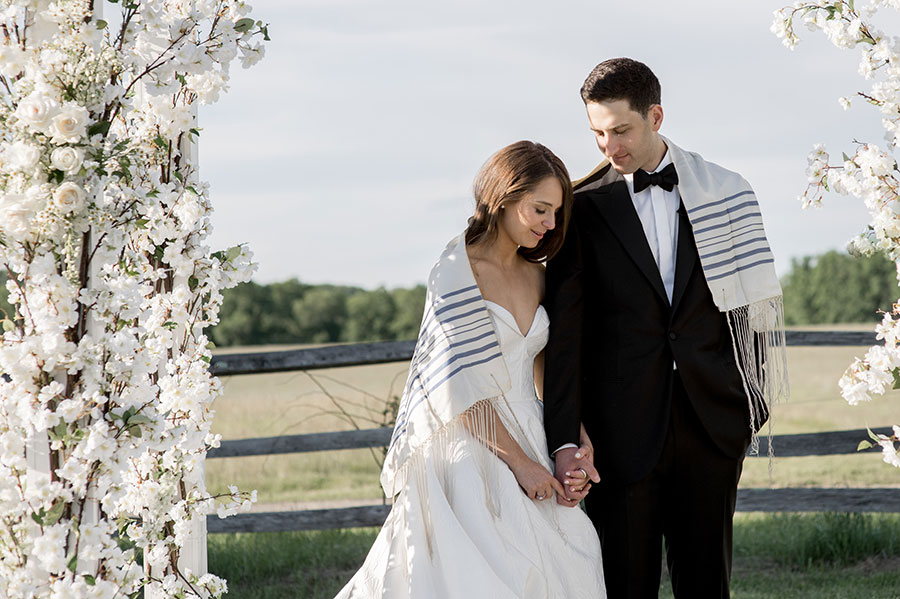 After the ceremony, Brett’s grandfather recited the blessing over the challah. It was a special challah that the couple had received from their close Epstein Hillel School friend, Zachary Shwartz, years before when he brought an extra challah for a Shabbat meal with the couple. They only ate one challah that Shabbat and froze the other one. Meanwhile, almost two years ago, Zachary passed away, and Brett and Hannah wanted to honor him at their wedding for helping to bring them together. Said Brett, “It was such a unique way to incorporate his blessing and memory into the wedding.”

The couple’s first dance was to the song, “Golden Hour” by Kacey Musgraves. Then Hannah’s parents surprised their daughter by introducing singer and songwriter Jessica Allossery – whom they had flown in from Toronto to perform “I’ll Let You Go” – Hannah and her father Steve’s’ favorite song. Then, father and daughter danced to the song, and soon afterward, Hannah and Brett were lifted on chairs as the band played the hora.

“I have been looking forward to it since my bar mitzvah so it’s taken 15 years to finally get back up on that chair,” said Brett.

For their honeymoon, Hannah and Brett plan to travel to Colombia in the fall, where they will tour the countryside, sample the coffee, and dance to salsa music. Said Hannah, “We didn’t want to go somewhere and just sit on a beach, we wanted to go somewhere to explore and have an adventure.”

Steven A. Rosenberg can be reached at rosenberg@jewishjournal.org

Iceland refuses to shut down site that targets Boston-area Jews

Editorial: Teach your children about truth and democracy

Editorial: Teach your children about truth and democracy