by Rich Tenorio
in Arts & Culture

Golda Meir was no longer Israeli prime minister when she gave a speech at the Knesset in 1977. Yet Egyptian president Anwar el-Sadat had wanted to meet her during his visit to Israel for a historic peace deal. Although she was battling longtime lymphoma, Meir addressed Sadat at the Israeli parliament.

A photo shows Meir laughing and smiling with Sadat and future Israeli prime minister Shimon Peres. At the end of her speech, Meir joked about whether Sadat had called her an old lady. He and Peres looked sheepish because they had each done so, on many occasions. This is part of the narrative from a new biography of Israel’s first female prime minister, “The Only Woman in the Room: Golda Meir and Her Path to Power” by Boston University emerita law professor Pnina Lahav.

“I wanted to highlight a woman who really made a difference,” said Lahav, who is also a member of BU’s Elie Wiesel Center for Judaic Studies. “To follow her career, to see what were the difficulties she encountered as she was going up the political ladder.”

Lahav also wanted to examine what she described as “the myth of Israeli gender equality,” by focusing on “the career of a very successful and accomplished woman.”

The book was released on Sept. 9. Its title is a twist on a comment by Israel’s founding prime minister, David Ben-Gurion, that Meir “was the only man in the cabinet.”

In the acknowledgments, Lahav thanks Derek Penslar, a professor of Jewish history at Harvard University, for first suggesting the title, which “turns this mostly pejorative statement on its head by arguing that in fact she was ‘the only woman’ in the cabinet and in meeting rooms in general.”

Lahav credits Meir with pragmatism and common sense, including during her supreme test as prime minister, the Yom Kippur War. Although fallout from Israel’s performance ultimately cost Meir the premiership, numerous decisions she made during and after the conflict earned praise from the author. That included partially mobilizing the IDF reserves after the surprise attack from Egypt and Syria.

Lahav describes herself as unsatisfied by previous Meir biographers: “The argument they made is that there was no indication that her being a woman made any difference. They also argued she was not a feminist … I actually said to myself, ‘this just can’t be.’ It’s one thing to say you are not a feminist and quite another to act in ways that are non-feminist. I wanted to explore it. It’s what is different in my biography than in other, previous biographies.”

The book chronicles young Meir battling gender stereotypes. She was born Golda Mabovitz in Kyiv, Ukraine in 1898. Her parents relocated the family from Eastern Europe to the American Midwest – namely Milwaukee. Their daughter got an American nickname – “Goldie” – and rebelled against societal expectations.

“She was raised to be a cute little button and a very good balabusta when she grew up,” Lahav said. “Have the right marriage to a well-to-do man, have a comfortable life – it’s what her parents hoped her to have.”

Instead, their 14-year-old daughter ran away to the Rocky Mountains, taking a train to Denver.

“What’s amazing about her is that she had agency, determination to go out and do things that her family and surroundings did not expect her to do,” Lahav said.

In 1921, the future prime minister immigrated with her husband Morris Myerson to Mandatory Palestine and lived on Kibbutz Merhavia. (Upon Ben-Gurion’s request, she Hebraized her last name to Meir in 1956.) Although she was assigned stereotypical female tasks on the kibbutz, such as making meals, she transformed these responsibilities into leadership opportunities.

“What she did was turn the job of making meals … into something very valuable, rather than a low-level service,” Lahav said. 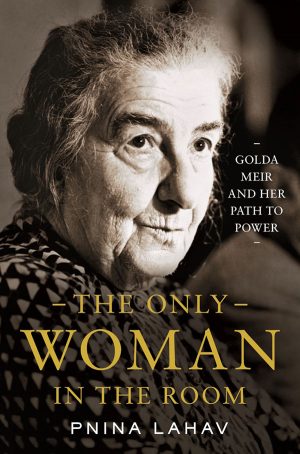 The book delves into the nuances of Meir’s career and life. As prime minister, she gave an interview to journalist Oriana Fallaci in which she dismissed Ben-Gurion’s quote about her, but also criticized American feminists. The narrative also explores Meir’s complex personal life, including her marriage to Myerson. The book states that before the marriage, the couple was sexually active, and Meir had an abortion in Chicago, which was illegal at the time.

Although the couple had two children, their marriage ended in a separation. Meir subsequently had affairs with two Israeli political powerhouses – David Remez and Zalman Shazar.

The book addresses the question of whether Remez influenced Meir’s political rise.

“The evidence indicates, however, that Golda is largely responsible for her own success,” Lahav writes, describing Meir as “a highly intelligent, able and loyal team member, and it is these attributes that best explain her brilliant ascent.”

Lahav notes that Meir repeatedly won the trust of Ben-Gurion, including on a secret mission on the eve of the Israeli War of Independence. Disguised in a hijab, she left Mandatory Palestine for Transjordan, where she met with King Abdullah in an unsuccessful attempt to persuade him not to attack the new Jewish state.

“[Ben-Gurion] trusted that she would do a good job,” Lahav said. “It shows you what her status was in the leadership. Her mission was very dangerous. She could have been killed.”

The author also spotlights Meir’s later achievements as a cabinet minister under Ben-Gurion, including passing maternity leave policies that still surpass anything in the US.

“Ask Israelis today,” Lahav added, “they think maternity leave is a God-given right. They take it for granted. Golda brought it about, not God.”

The rise and rise of Itamar Ben-Gvir, the far-right politician holding the key to Israel’s next coalition