A pair of show-stopper gift books are among eight new Hanukkah books for kids and older readers. Two others have local resonance – a Sephardic tale about chocolate and the Boston Tea Party, and a rare rom-com for teens by a local author, set on Nantucket during Hanukkah.

Eric Kimmel’s classic “Hershel and the Hanukkah Goblins,” with original illustrations by the late Trina Schart Hyman, is out in a special boxed gift edition that includes a poster of one of Hyman’s magnificent illustrations. More than 30 years after its first publication, the Caldecott honor book continues to enthrall a new generation of readers.

Another enchanting keeper is Lisa Rojany’s stunning “Hanukkah Pop-Up Menorah: An 8-Day Celebration of the Festival of Lights.”

Hannah Reynolds, the Cambridge author of “Eight Nights of Flirting,” for teens, told the Journal she wanted Jewish readers to feel seen during the winter holidays.

“There’s so much festiveness and joy, but sometimes it can feel lonely when you don’t see your own experiences and identity reflected in the stories and movies surrounding you,” she said in an email.

May these books brighten the Hanukkah celebration.

Young ones will enjoy counting the colorful, glowing candles for each night of Hanukkah in Amalia Hoffman’s beautifully illustrated board book with its simple rhyming verse.

A lively story with large, colorful illustrations about a sister and brother and their family who travel on an overnight adventure to Florida to celebrate Hanukkah with their Nonna and Nonno, their Sephardic grandparents.

Poor Tizzy. It’s hard being a spinning dreidel that gets dizzy. In the family’s dreidel contest, Tizzy surprises young Sarah and impresses her skeptical family by spinning around the house for eight days, just like the miracle of the oil in the Hanukkah story.

“Hershel and the Hanukkah Goblins”

As Hershel of Ostropol makes his way into an Old World shtetl on the first night of Hanukkah, the humble wanderer discovers that the village is dark. Mean-spirited goblins have frightened the Jews from lighting their menorahs and celebrating Hanukkah. Hershel is determined to light the synagogue’s menorah on each of Hanukkah’s eight nights. The rabbi warns Hershel that on the eighth night, the menacing goblin king will try to frighten him. Night after night, the intrigue builds as the clever and courageous Hershel outwits the goblins. Trina Schart Hyman’s glorious illustrations capture the mood, some with cartoonish style goblins and the darker goblin king. But, the menorah’s radiant candles glow with Hanukkah’s triumph of light over darkness. 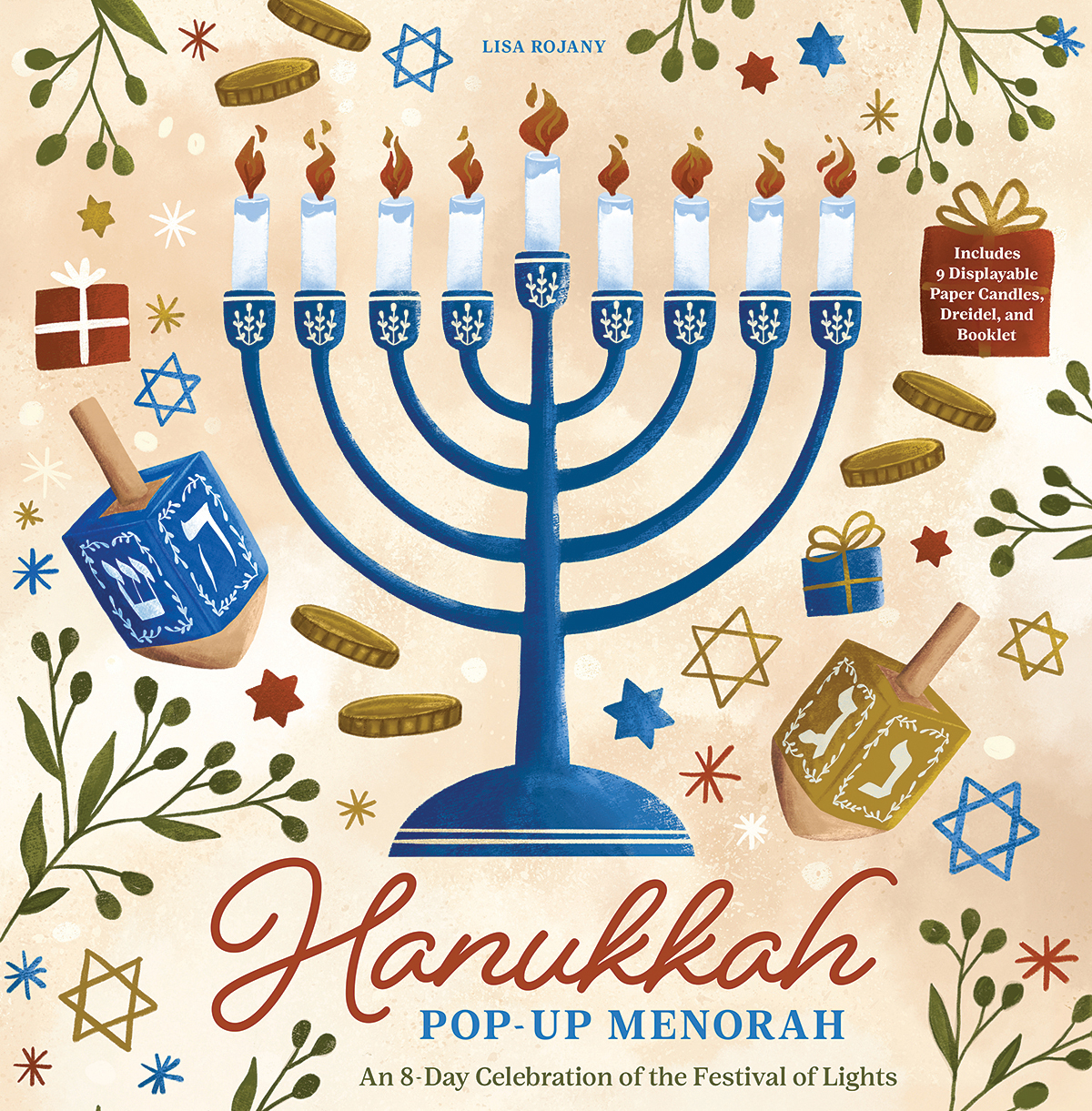 “Hanukkah Pop-Up Menorah: An 8-day Celebration of the Festival of Lights”

By Lisa Rojany; Insight Editions; ages 3 and up

As readers open this stunning, hardbound book, a large nine-branched paper cut Hanukkah menorah pops up and stands tall on the flat book surface. A paper candle is tucked into eight separate pockets that kids can pretend to light on each night. Another pocket reveals a paper dreidel and another pocket holds a 28-page booklet with the story of Hanukkah, songs, recipes, and a “how to” for playing the dreidel game.

In this heartwarming illustrated tale, set in Colonial times, readers meet the young Joshua Mendes and his father on the docks of the harbor in Newport, R.I., where workers unload cocoa beans from Joshua’s father’s ship, Esther. The beans are used for hot chocolate, popular among Colonists because the British raised the price for tea. Joshua’s family is Sephardic and he is looking forward to celebrating Janucá, the name for Hanukkah in Ladino, the language spoken for centuries by Jews from Spain and Portugal, from where they fled persecution. Joshua loves sipping his mother’s rich hot chocolate and eating Bumuelos, Separdic fried dough. Two parallel stories unfold: One is the enduring bond between Joshua and his friend Isaac, who moved to Boston. The other draws connections between Hanukkah, that recalls the ancient Maccabees’ fight for religious freedom and the Colonists’ fight for freedom.

“A Donut in Time: A Hanukkah Story”

This is the latest in the chapter book series about Saralee Siegel, a Jewish girl with a magical sense of smell. In this lighthearted time travel caper for Hanukkah, Saralee discovers that her great-grandmother Gigi shares
her superpower.

By Hannah Reynolds; Razorbill/Penguin Random House; ages 14 and up

Shira Barbanel is the proudly Jewish 16-year-old unlikely heroine in this entertaining Jewish-themed teen rom-com by award-winning Cambridge-based writer Hannah Reynolds. The endearing and sometimes maddening Shira desperately wants to up her flirting skills to attract a serious crush. But beneath the surface, there’s serious soul searching in Reynolds’ authentic characters. Set on Nantucket, the story, enlivened by a large cast of characters, includes a subplot involving Nantucket history and a shipwreck. Jewish teens will spot many of their own families’ traditions – from cooking Hanukkah dinners to lighting the menorah, exchanging gifts (and a tame version of a dreidel game involving sips of alcohol). They’ll also recognize the ups and downs of navigating relationships with friends and romantic interests. Θ